Friday evening at Bollington saw me have a nice hot shower, only then to realise the boat was somewhat chilly, so I suggested we light the stove, but to do that we needed some coal fetched in, so yes I went out in my PJ’s and wet hair, climbed into the hold and got a hod full of coal. Fire lit and warmth restored to the cabin, we settled down to watch the last of P.S I love you and then Outlaw Josey Wales, before heading off to bed at around 9.40 pm.

My morning began at 4.45 am, I know stupid o’clock. I was woken by the sound of bells. I thought someone as playing around with our terrets on the pigeon box, so dived out of bed and switched the light on in the engine room only to discover Marmite was sitting in the ash bucket and the mooring chain was banging against the bucket, giving off the sound like bells. Why on earth Marmite felt the need to sit in the ash bucket I can only imagine, but as you can deduce I was non to pleased with her and gave her a telling off for waking me up.

Back to bed and thankfully I was soon back into the land of nod. I then woke at 7 am to the sun coming through the pigeon box portholes. It was another beautiful morning.

Before doing us a scrummy Porridge breakfast Paddy got his walk along a frosty towpath and a nip in the air. The nip in the air was not really noticed because the sun was so beautiful.

Porridge was made and eaten and then I got on with getting dinner made, so it could sit cooking on the stove cooking whilst we went out. I then got on with making us a packed lunch, because we were going to walk to the Dunham Massey Deer Park and spend the day photographing the wildlife. From where we were moored it was a short walk to the underbridge, down the steps and onto the track, which took us past The Swan with Two Nicks pub and past the Old Mill which is now apartments. You are then in the ground of Dunham Massey House and the Deer Park. We were there early as the park opens at 9 am and I wanted it to be visitor free to get in some early photographs. We were fortunate that the Deer were also up early and were everywhere we looked.

If you have never visited Dunham Massey you really should. The park is free to walk around, you only pay to walk around the house and garden, which we did years ago, so we just wanted to see the Deer again and they did not disappoint. 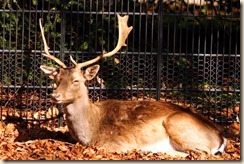 Lunchtime we found ourselves a nice log to sit on alongside one of the ponds. We ate our picnic whilst watching a Little Grebe dive for its lunch, a Swan watching over its nest and the Coot family feeding their five young and all around us Deer going on with their day. By the afternoon the grounds were very busy with people and children and that was our time to go, because it was getting to busy. 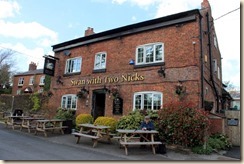 Having taken all the photographs we walked back to The Swan with two Nicks and had a half pint each of Bombadier, which went down a treat after all the walking we had done.

Back on the boat, I got on with a bit of hand washing and watched as dark clouds began to crowd the sky. It looked like rain was coming and so we were fortunate to be back on board and in the warm, because the stove was still ticking over from last night. Keith was going to offload his photographs from his camera to his laptop, only to discover he had forgotten to put the card in his camera, so he had no photograph grrrrr.

Dinner had cooked whilst we were out and all’s I then had to do was some Garlic Bread. The meatballs were really lovely even if I say so myself. I used up two crusty bread rolls which were really dried out to make garlic bread, they turned out alright as well, after adding some butter and garlic to them and softening them with a sprinkling of water. I never like to throw anything away.

It seems that all the walking etc is wearing us out, because we started watching a film, but both retired off to bed at 9.30 pm.

Paddy got walked after breakfast, which was toast and Marmalade in bed, a touch of luxury. I am so easily pleased.

Next job was to clean the brass outside, which included the four portholes I had not done since before the Winter. They were all gleaming in the early sunshine.

Jobs fast being ticked off the mental list. Next job was to polish the towpath side of the boat as the red was looking a little dull. I almost got the job complete when rain began to fall, so rain stopped play. The rest of the day was a total washout, so I just pottered on the boat getting a few boat chores done, until during the evening we watched ‘We were Soldiers” before heading off to bed