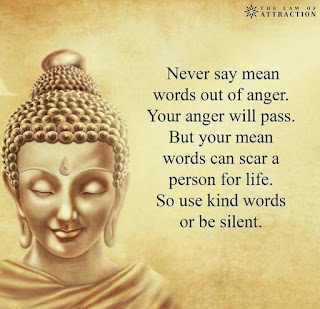 How is your January going so far?

Mine has been a busy one and we are on on the 10th day. Because the weather has been so mild, I have been out in the garden, getting it ready for the Spring. It seems the birds already think it is Spring, because I saw a Blue Tit gathering nesting material and the ducks are getting amorous already. I am pretty sure this mild weather will not last, so to be on the safe side, I placed an order for a tonne of coal to be delivered to the boat. I was told it would be some time either the end of this week or sometime next week, but they would ring me to let me know. We also had a boat safety examination book for this week, in fact this morning.

Yesterday Keith went and did the food shopping and whilst out he bought two new tires for Hetty. 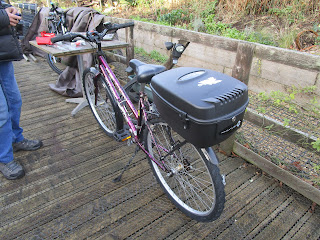 She was very very happy with her new rubber. Her old tyres were not wore, but were perished after being stood around doing nothing for the past couple of years. Now Hetty has her new tyres, I will be able to get out and about on her. Whilst Keith did the tyres, I helped Maria and Barry plant some Oak trees in the Arm. Unfortunately some of the trees had to be taken down due to rotting and safety, so it was fabulous to replant some new trees. Not only that the Oak trees have been grown from the Oaks in the Arm. We very much look forward to watching them grow.

This morning it was all hand on deck. We were up early to get the boat ready for our boat safety examination. We took the flooring up in the back cabin and the shelving down in the engine room so that the examiner could get to the batteries and the fel pipes. Just before he arrived our coal delivery appeared. 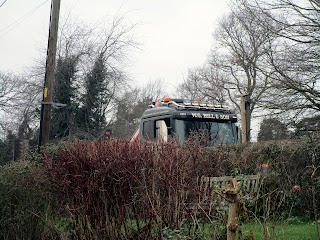 I had not received a phone call, but it was good to see him. As we were unloading the lorry the boat safety examiner arrived, so Keith went and helped him get started on the boat safety, whilst I did the coal. With the coal delivery done and the driver on his way, we could turn our attention to the examiner and anything he needed to know from us. I am pleased to say we passed our boat safety with fly colours, so that is done and dusted for another four years. Whilst we were certain we were going to be fine, there is always that worry in the back of your mind that he might find something amiss.
After all the excitement had died down, it was time to make some lunch. On the menu today was a 3 shu pie. When we were out cruising last year, we went to Frampton on Severn, where we had lunch in The Three Horse Shoes Pub. There claim to fame is 3 shu pie. Today I made my own version of the pie. 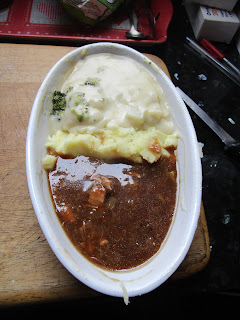 In two small oval dishes, I put mashed potato across the middle of the dishes. I then added Cauliflower and Broccoli Cheese to one end and Chicken and Leek to the other end. 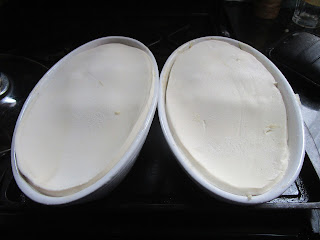 To top it off, I used Puff Pastry as its lid. I put it in the oven for half and hour. 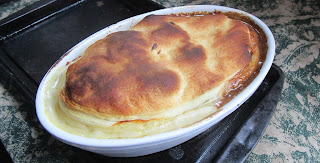 Lunch in a dish. Thank you to The Three Horseshoes for the inspiration. I will definitely be making it again. The rest of my Thursday was spent crocheting, before dinner and feet up for the evening.