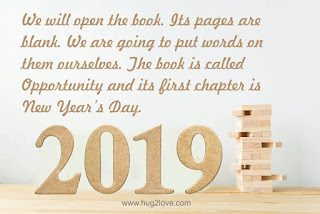 Here we are falling head first into a brand new year.
Whilst I was away, I did 80 locks. 40 locks to get to our Christmas dinner and then 40 locks to get home again. I realised that I was either unfit or getting mature in my years, because those locks seemed harder than they did a few months back. Anyway we left our mooring and went on our way to our friends for Christmas. 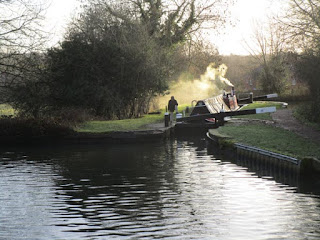 The lock paddles were not the best on many of the locks and certainly tested my strength at times, but we got there in the end.
We did not hurry. On the first night we stopped at Tom O'the Wood, where we went the pub for a pint and a bowl of peanuts. Yes I did say a bowl of nuts. They do not come in bags there, you are given a bowl with them in. Very posh. The next morning, we passed a blanket thrown into the hedge. We both thought that if it was there on the way back we would stop and collect it. 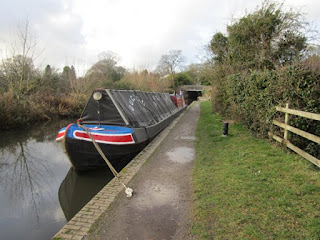 We arrived at our destination and settled in waiting for Christmas. On the first morning at our friends, I noticed that the battery warning light was flashing low battery. It turned out the 240v freezer was killing our batteries, which did not happen last Christmas. The only thing for it was to put everything into the fridge freezer and turn the 240v freezer off. Thankfully there was room. OH then ran the generator for a couple of hours to recharge the batteries. Phew disaster averted. We think we may need to change the batteries before we head out in March.
We spent a couple of lovely days doing nothing much at all. My friend gave me her bicycle, because she had hardly used it. It had a puncture in the back tyre, but the OH soon got that fixed. It has been years since I had a bicycle, so I am very much looking forward to getting mobil again with the aid of two wheels.
Christmas Day arrived. We opened our presents to each other before going to our friends for a fabulous lunch. We spent the day chatting, laughing and watching Elf, which we had not seen. After a wonderful day, we retired back to our boat.
Boxing Day we said "Cheerio" to our friend and headed from whence we came. The first day doing the Lapworth 19 locks, with their hard paddles, but we did meet some lovely people out for their Boxing Day stroll. 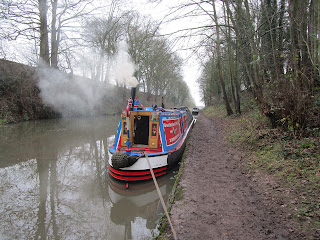 The blanket we saw on coming up, was still in the hedge, so we stopped and I gathered it out of the hedge. It was a fleece blanket with a few holes in it, bit I saw potential and therefore it was coming home with us.
We moored overnight at the top of the Hatton Locks. The next morning, it was overcast, but very mild for December. We set off down the locks and were met part way down by a boating friend, who lock wheeled us down the rest of the locks to home. 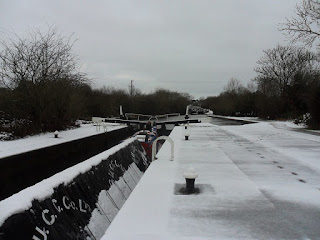 This was 2017 coming down the Hatton Locks, when we had two inches of snow and sheet ice. So December's weather was really strange, with it being so mild.
Back home, we hooked up and settled in. It was lovely to have the TV on again and to not have to worry about running the batteries down. Both of us were completely shattered.
The next morning which was Friday 28th Dec, I did a laundry wash, which included the fleece blanket we rescued. I will do something with it once it has dried. After doing boat chores, we walked into town to Vision Express to get a new screw put in my glasses, because I seemed to have lost the one that was in there. I was just thankful it did not happen when working the locks, otherwise I may have lost a lens. New screw in my glasses, we caught the bus to Leamington-Spa, where we went to Halfords, to buy a bicycle helmet, basket and bell for my bicycle. The OH also bought himself a bicycle, so we can go cycling together. To get the bicycle home, he had to ride it and I caught the bus. He actually arrived home 15 minutes behind me, which was good going. With the bike stowed away, dinner cooked and eaten, we settled down to watch films. For the first time, we watched Eddie The Eagle. What an absolutely brilliant film. I of course remember Eddie and also remember sitting there watching him at the Olympics and just crossing my fingers that he actually landed the jump on the 90 metres, which as we all know he did. Eddie shows that you should never give up on your dream, no matter how tough it gets. I will be watching it again, because I liked it so much and not just because Hugh Jackman is in it, honest.
Saturday 29th and another day closer to 2019. It was still incredibly mild, so what do you do on a mild day in the festive season. I pressure washed our pontoon. I know, I know how to live it up. Before doing the pontoon though, we got my bike out of the hold. We put the fixed wheel back on, then added the basket and bell. I then took it out for a spin onto the industrial estate. It felt so nice to be back on two wheels. I have always ridden a bike, even as a child. I then went on to have a moped for a few years. I will now be back out there on my bicycle now, which will mean I can go further afield. The washing of the pontoon all began because our neighbours both did theres, so whilst the pressure washer was available, I decided that I should do ours, because the pontoon although fitted with chicken wire is very slippery at this time of the year. I had it all done in just over an hour. Some of the chicken wire will need replacing, which we will sort out in the New Year.
New years Eve. I managed to stay up to see it in with a tot of Whiskey, which we do every year.
May 2019 be kind to you and yours. May it bring you good health, happiness, laughter and sunshine.