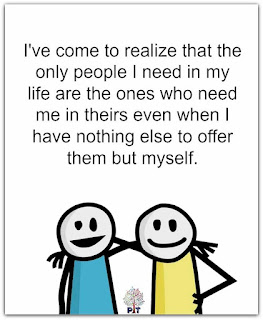 Well, what can I say about the weather?
It is dreadful. Yesterday although windy, was sunny and we had our nice walk. Last night we were most definitely rocking and rolling. Rain was thumping on the roof of the back cabin as I lay in bed, wondering if there was anything outside which would blow away. Sleep was on and off overnight due to the wind.
On waking up, we woke to the wind still blowing a hooley and the rain lashing down, so no change.
The only thing to do was to cook, crochet and read.
The sun did pop out at 3pm for a short while, but we were bracing ourselves for Storm Gareth.
After the storms of yesterday, this morning we woke to yet more wind and rain and the thought of "Shall we move today". The answer was possibly yes, if as the forecaster suggested it calmed down. However at 9am the rain was lashing down and the wind was blowing a hooley.
Come 9.20am and it was such a different story. The sun was out and the wind had dropped, so we decided to brave it and leave The Black Boy moorings and make our way to the Knowle Locks. But before we could do that we had a little matter of actually getting off the mooring. Due to it being shallow, we were sucked onto the mud and Hadar was not for moving. It took a bit of toing and froing before finally we made it into the middle of the cut and were on our way. We said our "Goodbyes" before leaving in the wind. 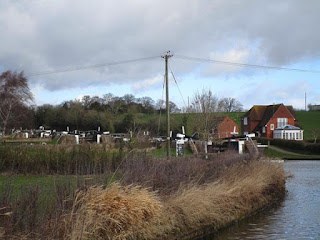 As we approached Knowle Locks, the wind was getting up again. I managed to get off the boat to get the first locks started. 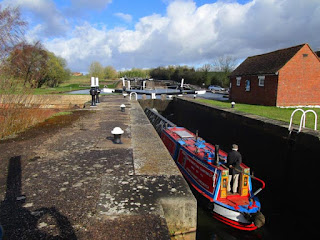 Once in the lock and the paddle up, I walked upto the second lock and emptied that, so that once the first lock was full and Keith had opened the gate, he could make his way into the second lock, whilst I walked back and shut the gate. This plan worked well and meant Hadar did not get caught in the pound by the gusting wind. Of course it meant more walking for me, but needs must and all that. Then there was also the problem of the gates blowing open once shut, so I was having to do them all over again. 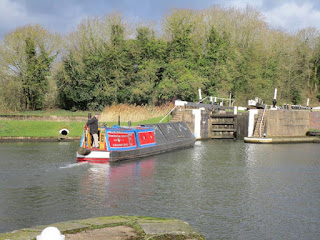 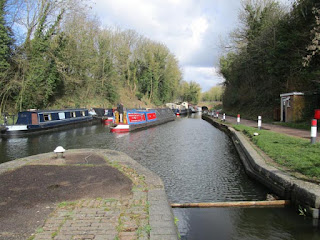 We made it to the top lock. Whilst in the lock, I got rid of rubbish and emptied our cassette. I thought rather than mooring on the towpath, it was easier to do it in the lock, so we did not get caught by the wind. 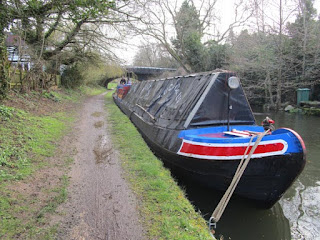 After a very windy cruise and some heavy rain, we made it to Catherine de Barnes. After lunch we walked the short distance to the Spar store to buy some fruit, because we like fruit and yogurt after our lunch and we have run out. I like to support village shops when I can, after all if they do not get supported they close. Catherine De Barnes sounds like such a posh name for a village. Its name originates from Ketelberne, the man who owned it after the Norman Conquest in 1066. However it is mainly a later settlement probably dating from the building of the Grand Union Canal there and the present St Catherine's church, now a village hall, was built by Joseph Gillott in 1879. The village pub is called The Boat Inn and is a Chef and Brewer opposite the Spar store, so not far to walk, should anyone feel the need for a pint.
We are stopping here for the night and so I will start a new blanket for the Collies, because I have just finished my sixth blanket for 2019. 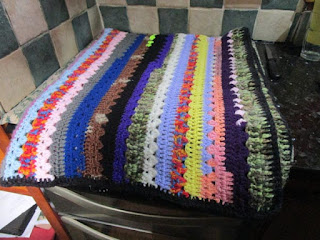 This one has wool in it which has come all the way from Canada. I use all donated wool for the Collie blankets. I am so grateful for all the donations and the Collies love their blankets.