Bugs on the move. 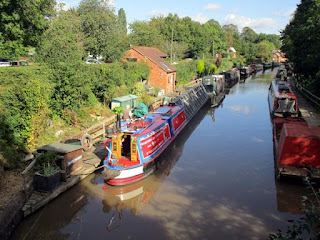 After a damp start to our Wednesday, the sun came out and we have had another busy day in the garden. 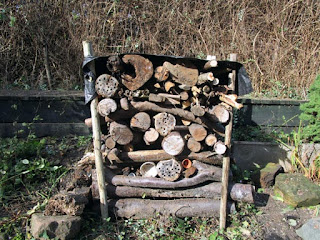 This afternoon we moved the log pile, which we had on our old garden for the beasties and bugs. Whilst removing the logs, it certainly looked like we had someone nesting in between the logs at some point, because there was a little nest and some marigold seeds in a pile. I think we may have had a wood mouse in there at some point, but there was no sign of it being in there recently. We rebuilt the log pile in our new garden and put back the solitary bee homes, which have laeve in them. The log pile has been built over an old tree stump, because there was absolutely no way we could dig it out, so we have covered it up. Having moved the log pile, we got on with moving the bug hotel as well. I need to redo the layers and add some new things, but it is in place and we also bought some of the spiders and bugs with their home 🐌🐜🕷 , so they also have a new home now. Finally we relocated nest boxes and bee hotels. The bird boxes will be put up after they have been cleaned and the boxes painted, keeping them waterproof. I want to put some felt on the roofs as well, because they are leaking.
Update on our generator, which you may recall from a previous post has died. Rob from Kate Boats came and inspected the generator, he confirmed it has seized and will be contacting Fischer Panda to see how to proceed, so fingers crossed. Now that we have moved all the large items from our old garden, I can now begin to dig the garden over and start moving plants. I also have a rockery to build somewhere on the garden, but I am undecided as to where that will go yet. I think it will just evolve. The garden is really taking shape now and we are both really pleased with it so far.
My day ended with me cooking dinner. I am now putting my feet up, because my legs ache and I am shattered.