Day 116: Bank Holiday in the sunshine. 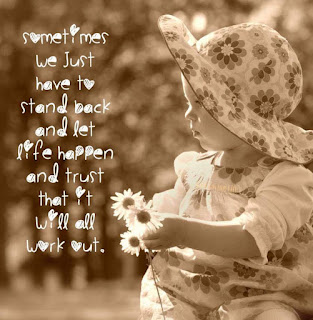 Sunday morning and I enjoyed a bit of a lie in. I did not wake until 8 am, which for me is late. Sunday's for me is a day to do as little as possible, not because I am religious, but because it is how I have always thought. Who remembers the days when Sunday's were a day of rest?
There were no shops open (like now). You went to church first thing. In my case as a child it was to sing in the church choir. Yes I was one of those in a cassock, surplice and ruff. Blimey those ruffs used to chaff, because they were starched. I always felt like I was being strangled. Singing in the choir was always such a joy, because I loved to sing and still do. I sound like a strangled cat, but who cares. If you enjoy singing then just do it. Do you remember the pubs used to open at lunchtime for a couple of hours and then close again. Now they are open all day, well not at the moment, but hopefully they will be again soon. Sunday was always a day to either visit family or stay at home and watch the Sunday afternoon movie. How the times changed and yet in a way we are back to those days due to the Coronavirus.
We began our day as always with the first brew of the day, which was enjoyed whilst watching the BBC 1 breakfast news. The news was still dominated by the virus and an MP was being pushed into quitting, after they supposedly broke the lockdown rules. It made me think about how everyone interprets the lockdown rules. We are all human with differing ideas as to what the rules mean and I think this is why so many people have become judgemental and angry. I am not an angry person and even if I was, I would certainly not take it out on others, because as we all know life is way to short. This does not however mean we cannot have an opinion. We are all entitled to express our opinion, but I think it should be done is a guarded way and not with vitriol.
After enjoy the first cuppa of the day, it was time to climb out from beneath the duvet and start the day. I began with cooking up Lemon Chicken, which would be consumed at lunchtime. Whilst preparing and cooking that, I made us toast for breakfast. I like a bit of multi-tasking. 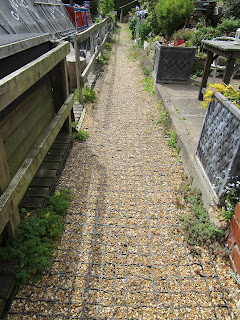 Having enjoyed a nice leisurely lunch and coffee, I felt the need to do something, so I went out and began to weed the path which runs along side our boat. The plants on the edges were already there when we moved onto the mooring, and I love them, they are a mix of rockery plants and forget me nots. The weeds in the middle are getting to much and had to go. With the aid of a cushion, tiny palate knife and a bucket, I managed to do up just past the first planter, before stopping for coffee and the making of tea. 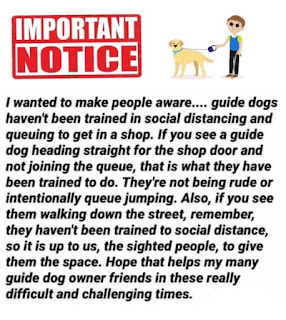 I was sent the poster above by a friend, who asked me to post it on my Facebook and Twitter page. Most people would not even think about how this self distancing for the virus would affect the blind and their dogs. I hope this makes everyone think a little and if you are on social media, maybe you will share it around. There are those out there who must be finding this all dreadfully difficult and a little compassion and patience is definitely called for. Sunday on the whole was a quiet affair, as Sundays should be.

Bank Holiday Monday we once again awoke to sunshine. We have been fortunate that in this lockdown the weather has been so lovely. It has made the whole thing more bearable, because a little sunshine can brighten any spirits. We are also fortunate to have an open space to enjoy, which has no walkers, cyclists or runners passing by. We listen to BBC CWR every day when on the mooring. I was telephoned by the radio station and asked if I would do their daily quiz, which is called snake escape. It is based on snakes and ladder. You get a question right, you climb the ladder. You get the question wrong you slide down the snake. At 11am the radio station rang me and I took part in the quiz with the lovely Vic Minett. Sadly I did not fare too well. I got a question right, then one wrong. I played my bonus which gets you 5 points and the next question I got wrong. I ended up with one point, which matched what Keith had done a couple of weeks earlier. I enjoyed a lovely chat with Vic who we have gotten to know well over the years we have been here. Vic likened Keith and I to Terry and June. I reckon she may well be right in some respects and I am happy to have that title, because I used to love that program. Because it was another hot day, we spent most of the afternoon outside under the parasol, enjoying the peace and quiet. There was no roadworks and even the road seemed quieter, although there were a few people walking, cycling and running going over the bridge. 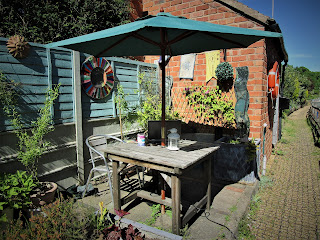 Tuesday and yes you guessed it, the sun was shining and the roadworks were back on. We were actually awake before the roadworks got underway and drinking tea at just after 7am. I wanted to be up earlier anyway to start some more painting jobs. I had noticed that there were a few rust spots appearing around the mushroom vents and decided they would get my attention today. 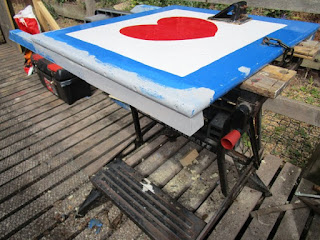 Another job that needed doing more urgently was our slide runner. The slide needs replacing when we can get hold of some timber. The underneath is rotting and one of the runners had a hole in it due to rot. It had been like it for at least a couple of years. 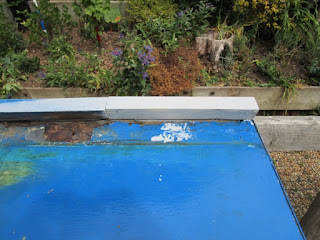 The hardboard is pretty rotten and is only held together by the aluminum top and sides. Keith was a little worried about doing the job, in case it went wrong and we were left without a slide, but I assured him it would be just fine. As it turned out, he did a good job with my help and so we replaced part of the rotten runner, screwed it all in place and I have undercoated it. Hopefully once we feel it is safe to go out shopping, we can get some new hardboard and do a proper job. But for now it will surfice. 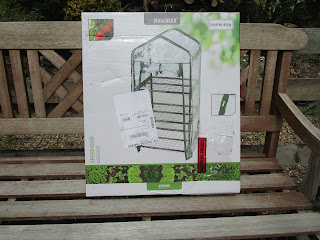 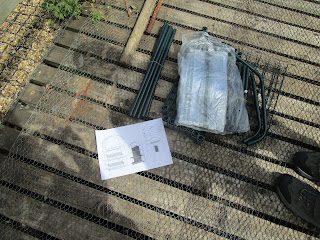 Now to put the jigsaw together. 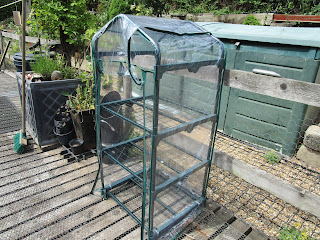 A five minute job and hey presto a small green house to play with. I have already potted up some dwarf beans. I am hoping to grow a lot more things over the coming months and years. I would like to think I can get a veg plot going, in order to help feed us. I love gardening and now I have this, it will encourage me to do more. We have cable tied it down, so it does not blow away with one puff of wind.
It is now mid afternoon and time to put my feet up and watch some John Wayne movies. It would have been his birthday. Sony Movies is doing a John Wayne Birthday bash.

I hope everyone is keeping safe and well?