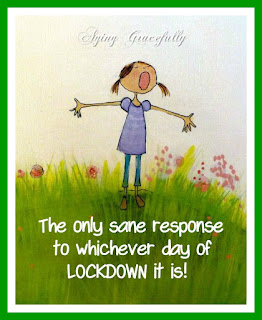 How is everyone doing. The UK is now 72 days into the Coronavirus Pandemic. For us it all began on the 31st January. How the time has flown and yet there are more people dying and still people are NOT listening to the guidelines. Yes I know it is the Easter weekend, but we have been asked repeatedly to stay at home. Only leave home for food, medication and exercise. It would seem that some people think that when they go out for their exercise it takes all day and requires a picnic. NO NO NO. Even here today, we have seen more walkers and cyclists and there have been more cars on the road. Now of course some of those people will have been sticking to the restrictions, but having listened to some of the people walking over the bridge, some were out on a jolly. I will repeat myself yet again for those who are reading this and not getting it.
PLEASE, PLEASE, PLEASE STAY AT HOME. YOU WILL BE HELPING TO SAVE LIVES. Today 917 people lost their lives, that brings the total number of deaths we know of to 9875. This does not include those who have died in care homes or at home :-(

We are at home on our mooring and following the restrictions to the letter. I have not actually left the Arm at all yet, because I am actually too worried to do so. Keith only went to the post office, because he had too. But he went straight there, and came straight back. With so much time on our hands, it is a great time to get done all the jobs we have put off, or had no time to do. One of those jobs was our hosepipe bunker. It used to house the other moorers tumble drier, but as we do not have one, I store out hosepipe and bits and bobs in there. Anyway we noticed that our long bunker lid which is connected to it was always wet, I then figured out that when it rained it was seeping through the felt and into the long bunker. 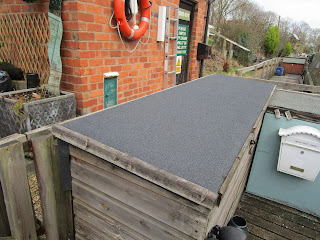 The plan was to take the roof off the small bunker with the letter box on it. Lower the roof and re-felt the roof, making sure that rain water would not be able to seep into the long bunker. 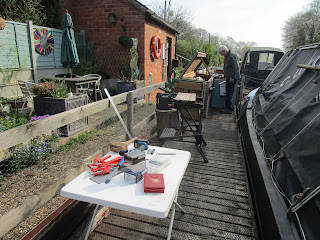 Out came all the tools. 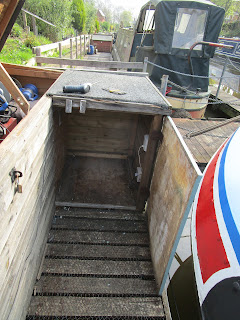 Small bunker emptied and decisions taken on how we would achieve what we wanted too do. Hoping that it was not going to be a long job. 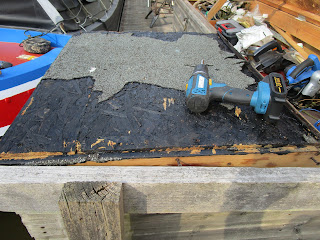 I got on with stripping the old felt off. The board underneath was a touch soggy, where it had been soaking up the rain water. 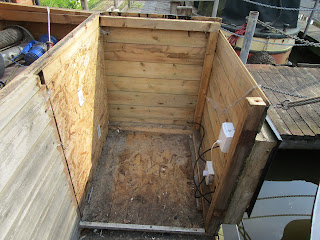 We managed to get the roof off without to much messing about. Some of the screw heads were rusty and there was no chance of getting them out with a screwdriver, so we used a hacksaw and some brute strength. 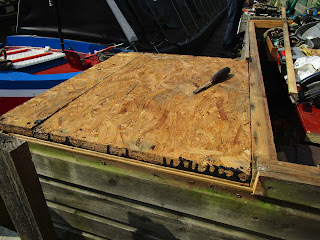 Because the previous moorer used slated boards, it was easy to remove a layer and cut the uprights shorter.. The roof then went back on and we laid on some new felt, which was fixed into place with wooden battens. 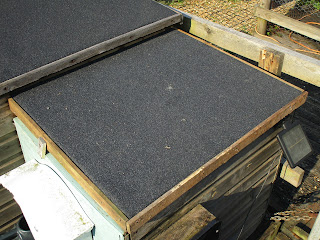 We trimmed just over an inch off the bottom of the door, before rehanging it. We are really quite chuffed with how it went and looks. Hopefully no wet bunkers for a few years. To do list has another tick next to a job well done. It has to be said the job took us all day, but that was only because we took breaks to get out of the sun and the heat, which was really hot before and after lunch. I used to be a sun worshiper, but not these days. Anyway it did not matter how long it took, because we are going no where.
Dinner was Chicken Korma and rice with all the trimmings. Now I fancy a beer.

Time to put my feet up and watch the evening films.