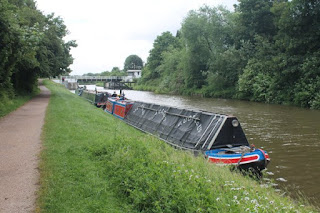 I know I bet you have been sat with bated breath waiting for me to post. Life and fun got in the way and to be honest, I just needed to take a few days break from posting.
We had been at Patch Bridge, but moved back into Gloucester to do the food shopping.
Before moving though we enjoyed a fabulous few days with friends Jenny and David on Keswickian Lad, who had unfortunately broken down with their alternator dying. But being with RCR they should have been fixed pretty darn quick, or so you would of thought. Sadly that was not the case and as I write they are still at Patch Bridge waiting for the powers that be to get their act together.
We on the other hand decided we needed shopping and so left Jenny and David and headed back to Gloucester. We stopped at Llanthony Bridge moorings and went shopping in Aldi first, before moving into the docks. 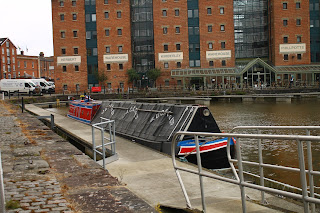 Amazingly we were the only boat in the docks moored on the pontoon. Even the bridge keeper had never known it so quiet. After lunch we decided to go for a walk around the city and see other bits we had not seen before. 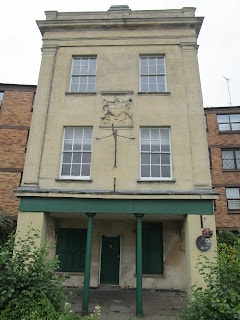 The Old Customs House.
Anyway having enjoyed a lovely stroll, to see more of the city, we headed back to the boat. I got my camera out and decided to take photographs of the Seagulls, which were having a marvellous bath in the docks. 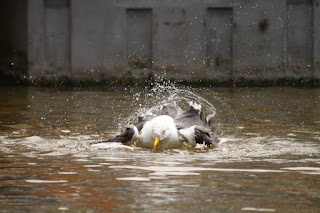 They really are funny birds and they all bath differently I discovered.
Wednesday we went to the Waterways Museum to see the steam dredger in steam, only to be told that after inspection they had found Asbestos, so it would not be happening, but they did get the steam crane going, which was somewhat of an anticlimax.
To make up for the disappointment, we had lunch at Greek on the Docks. This was our first ever Greek meal and we absolutely loved it. We can recommend it if you come to Gloucester.

After the beautiful weather of the past few days, last night we were kept awake by Storm Hector, who was blowing up a hooley. The waves were lapping around the boat, keeping us and the other boaters awake in the docks. We hardly got any sleep to be honest and at 3 am we were having a brew, whilst still listening to the wind.
Today was moving day, because you only get 48 hours in the docks, otherwise you get charged £25 a day for the first 7 days and then it goes up to £50. So with the wind still blowing and the rain coming in. It was a bit tricky getting away from the pontoon this morning, as the wind was pinning us against it, but I held the bow line around the cleat on the pontoon whilst Keith drove the stern against the wind with the engine. We did get off and were soon on our way. It was not a pleasant jaunt, but having moored up at Sims Bridge, the wind dropped and the sun came out. After lunch we walked to Tesco to get some cat food and a couple of other items, after all we cannot have Marmite going hungry. Tomorrow we will be off to find a weekend mooring.