"Goodbye" to an angel. 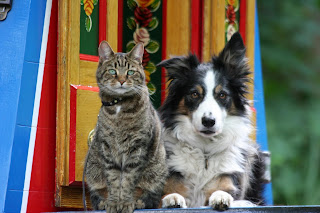 Over the years I have posted many photographs of our crew, Marmite and Paddy. As you will all know we lost Marmite back in July and so to lose our other crew mate is cruel. 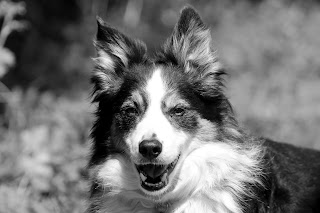 This morning Keith and I took Paddy to the vets for his vaccinations and a health check. After a long discussion with the vet, it was decided the best thing for Paddy was to put him to sleep. So we said "goodbye" to our darling boy Paddy. He has walked over the rainbow bridge to be with his best friend Marmite. 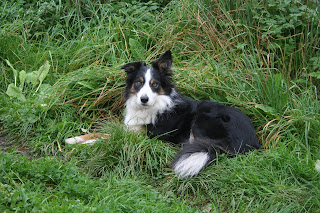 We sat on the floor with him, hugging him as the vet gave him the injection, which would end his life. Putting him to sleep, he has taken a big part of our hearts with him. He joined our family at the age of 11 months old from The Border Collie Trust. He was almost 15 and had a fantastic life afloat. Paddy bought so much unconditional love and joy into our lives, we are both going to find it so hard to be without him, but it was his time to go and join Marmite. Sleep well sweet man.
We all know that our pets are with us for such a small part of our lives, but they leave huge holes when they are gone. Paddy was such a gentle soul and he did not have a evil bone in his body and that is why it hurts so much to let him go. His health has declined a lot over the past few weeks, with his fits becoming more and more and his bladder had a mind of its own, which was due to his back legs failing. We know we have done the very best for our boy, but oh boy it hurts.
Sleep well sweet man.xxxxxxxxx
Posted by Jo Lodge at Tuesday, November 13, 2018