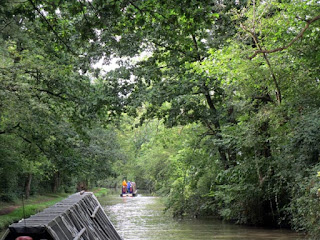 I must be feeling my age, because I was in bed last night just after 9.15pm. I was feeling so tired and not myself, so decided the best place was bed. I did have a good nights sleep, but woke up this morning with a dodgy right knee. This is the knee which was damaged in a moped accident and the knee which I had the cartlidge removed. I am hoping it will settle down over the next couple of days.
Despite the dodgy knee, we were up and on our way at 8am. 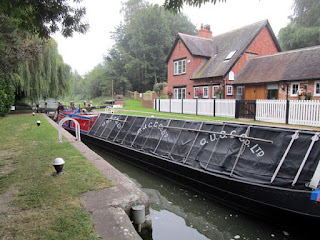 We were down the Braunston Locks in just over an hour, even though they were all against us but the final lock, where the volunteers were on duty. 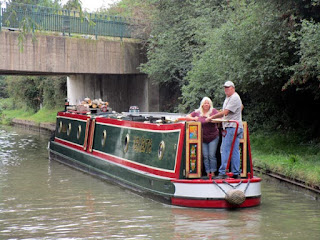 Just before Rugby we met up with Del and Al on Derwent 6. It has been an absolute age, since we saw them last, so it was so wonderful to say a quick "Hello" and swap cruising details. 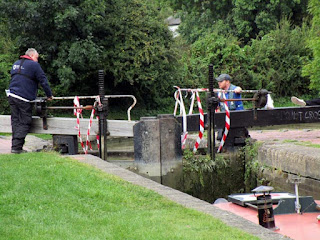 We had been making such good progress and then we arrived at Hillmorton Locks to find ourselves in a queue. Three of the locks were out of action due to a cill failure and one of the working locks was dodgy due to the walking plank being very loose. I was told by one of the C&RT men that they are having issues in getting spare parts, so it does not bode to well for what remains of the season. It took over an hour and half to do three locks. 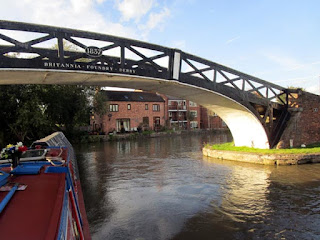 We decided to get through Hawkesbury Junction before stopping for the day. We are moored at Hawkesbury visitor moorings on the Coventry canal, 23.9 miles, 10 locks, 1 tunnel, 10 hours 15 mins. A long old day, with thrill and spills, bumps and scratches.