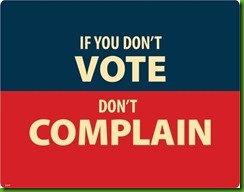 As all the readers in the UK know today is voting day. Now as you know I am not political on my blog, there are enough blogs out there covering politics, but I would like to say as far as us ladies go we should vote.

Before 1918 we as women were not allowed to vote in parliamentary elections, it was a men only club. But come the 20th century there were two main groups active in the campaign for women's suffrage, a term used to describe the right to vote.

These two groups were the 'suffragists' they campaigned using peaceful methods such as lobbying. the second group were the 'suffragettes' they were determined that women should have the right to vote by what ever means necessary. This lead to some unlawful and violent acts which, but this of course attracted much publicity.

In 1918 the Representation of the People Act was passed which meant any women over the age of 30 who met a property qualification had the right to vote. Although 8.5 million women met this criteria, it only represented 40 per cent of the total population of women in the UK. It was not until the Equal Franchise Act of 1928 that women over the age of 21 were able to vote and women finally achieved the same voting rights as men. This act increased the number of women eligible to vote to 15 million. So you see those who fought for the women’s right to vote have given us a voice and we should use it. I personally thank all those women who fought for this right to put a cross on a piece of paper.

This morning we walked to the Polling Station and voted. I am not going to say which way I voted, because that is my personal choice, but who ever we all vote for let us hope that we can all get along.

It's a democracy and I'm proud of having one. Vote how you want, as long as you are informed and happy who am I to comment.
Voting is a freedom some countries don't have.
Differences should be put aside and we unite as a country. Look after each other, be friendly and support each other.