Up the hill and breakfast. 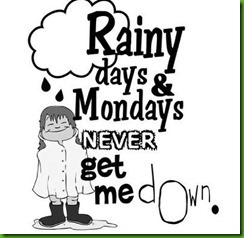 After a perfect Sunday afternoon with the Alarum Theatre, I invited the ladies to join us for the pub quiz at The Punch Bowl. There were seven teams and some what we thought were really difficult questions and so we were not surprised when we came 5th. The Alarum Theatre team, which called themselves ‘Idle Women’ kept us all up by coming last, but as I say it was a difficult quiz. We all had a brilliant time though.

This morning began as a soggy Monday morning and of course we had the Hatton flight of locks to do. 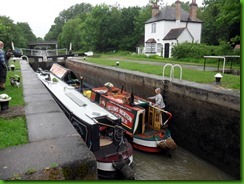 We set off from the Saltisford Arm at 8 am to set the first lock, where the boats and crew members joined us at 8.30 am. 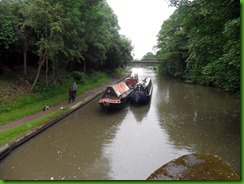 Before exiting the first lock the boats were breasted up. 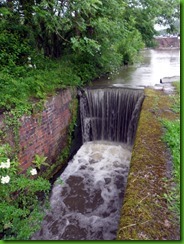 There was plenty of water. 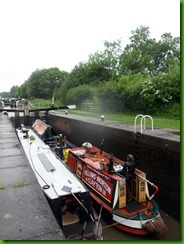 Rain still falling we made our way up the hill. Keith went ahead setting the locks, whilst Heather, Kate, Francis and I closed the locks. It worked like clock work. 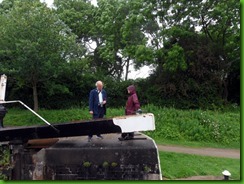 Joining us was Andrew Denny who write for Waterways World. 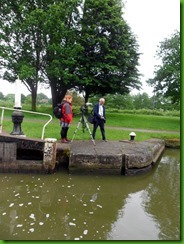 Erin also joined us and was filming for the Theatre group. 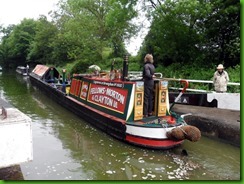 Despite the weather we did the Hatton Flight in Two and Three Quarter Hours and so we thought a breakfast in the cafe was called for. Keith and I both had a lovely English breakfast, which went down really well because we had not eaten breakfast before leaving the boat. It also served as lunch as well, all washed down with a cup of warming tea.

We had an absolutely fabulous time with Kate, Heather 1, Heather 2, Francis, Brian, Alex, Andrew and Erin and we sincerely hope that the ‘Idle Women of the Wartime Waterways’ continues its success. Having said our “Goodbyes” we walked back down the flight and home to the boat. A good day was had by all.