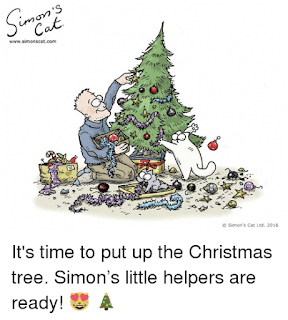 Have you found that everything comes in threes?
I usually find when it is bad luck or something going wrong, it always comes in threes. As you will know from my post on the 1st of December, it was decoration putting up day and you saw the photograph of the tree finished. I was so proud and happy with the tree, but that began to fade as we stepped into Sunday. The transformer in the plug began to make a funny noise, which was like a droning sound and got louder and louder. Not liking the sound, I decided that the lights would have to come off and be thrown away, because for all I knew they could of caught fire. Now I was trying to take a short cut, by hoping to get the lights off the tree without having to take everything off. I cut the lights off in stages, which meant they definitely went into the bin. As for new lights, we had some Red berry lights, so I put those on without taking the baubles and bits off of the tree. I switched them on and woo hoo all was good for all of a few moments, when suddenly half the lights went out grrrrrr. I stripped them off of the tree and the OH repaired a broken connection. Before putting them on the tree, I did switch them on and they were working a treat, but no sooner I put them on the tree, half the lights failed again. This was beginning to get annoying. I took the lights off and left them for the OH to look at again.
This morning, whilst I went into town to go some bits, the OH repaired the lights. I also bought some new lights at half price, just in case I was left with no lights. Although the lights had been fixed, I did not feel the urge to put them on the tree again, only for them to fail again, so I decided to put the new lights on the tree. This time I stripped everything off of the tree, put the lights on and then put all the bauble and bits back on. 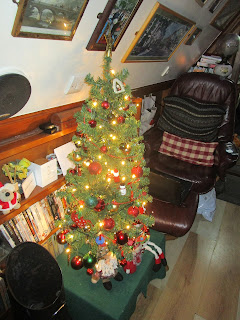 Phewwww what a saga just for Christmas. The Red berry lights are hanging in the back cabin, so if they should go wrong again, they will be easy to take down. That is it, the tree is decorated and I am not going to do it again.
Going back to this morning. As I walked down the path alongside the boats, out of the corner of my eye, I spotted movement on the offside bank. I turned around to see a beautiful Fox making its way along the bank. Sadly it was lame on one of its front legs. I really hope it is going to be alright and I will get to see it again. I think it may have been a female, because it was not very big. Such a stunning animal.