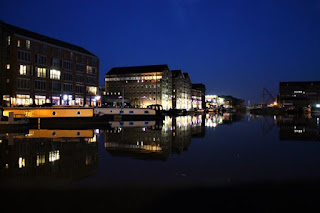 As I reported in my last post we had broken down and were moored at Lower Lode Inn. Well a fair bit has happened since then, so if you are sitting comfortably, with a cuppa I will begin.
We were made so welcome at Lower Lode Inn. The owner Samantha was so helpful in allowing us to use her facilities on site as she has a campsite. We made friends with Julia and Brian who own a static caravan near the Inn. They took me food shopping in Tewksbury and were so lovely. Before Carole and Adrian left us, we had a meal with them in the Inn which was excellent. The food and beer make this such a popular place, so you can sometime wait a bit for the food, but it was so worth it.
Carole and Adrian left us and went on their merry way, because they were on their two weeks holiday and we were on our own, waiting for Paul Redshaw our engineer. Paul built the broken down starter motor when the engine was put together almost 11 years ago, so we gave him the job of doing us a new starter motor. Whilst we waited I did some brass cleaning and a bit of painting as well. When I was not busy I was taking photographs of the Mouse family living in a breeze block. 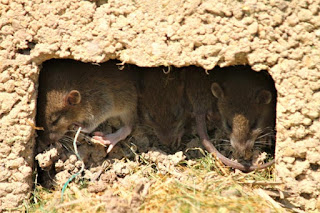 They were very entertaining and the next day they were gone, they had moved out. We also had the pleasure of seeing a Red Kite flying with four Buzzards.
Friday morning dawned and having heard from Paul on Thursday, he said he would be with us on the Friday hopefully. He was good to his word and arrived about 11am. I was off out shopping with Julia and Brian, so I left Keith to help Paul with the job in hand, but I did have my fingers tightly crossed. When I got home the news was good and bad. The good news was the new starter motor which Paul had to build for us was working brilliantly. The bad news was out starter battery had died. Mind you it was 11 years old. The shorting out of the starter motor had killed it. So we were going to have to jump start the old girl using our leisure batteries, which was fine because we have a special switch in the system for that. 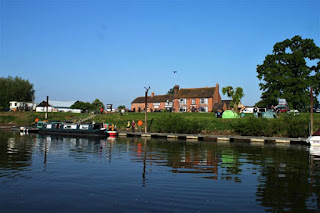 To celebrate I bought lunch in the Inn and yes it was followed by a pint. We also had a pint in the evening with Julia and Brian. With all of this going on I was keeping in touch with C&RT, letting them know progress or lack of it and so on Friday afternoon I was able to say to them that we would be off on Saturday morning and thanked them for their help.
Saturday morning we said "Cheerio" to everyone for now, as we will be going back. We were off to Gloucester. 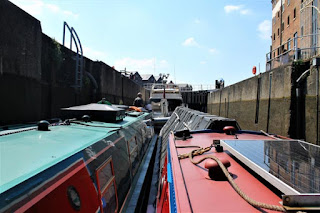 We left at 8.30am and were followed by Magda and Lawrence on Wea-ry-tired. They had joined us at the Inn Thursday. It had been nice seeing them again as they had been in the Saltisford Arm last year. Magda stayed in the Arm on the boat whilst Lawrence was off playing golf. There was plenty of catching-up to be done between us all and yes a pint of two were enjoyed. We arrived in Gloucester and locked up with them and a posh boat. 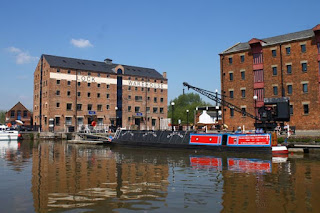 We spent the remainder of Saturday walking into the city and then Saturday evening Magda and Lawrence invited us to a meal out with them at an Italian restaurant which was lovely. 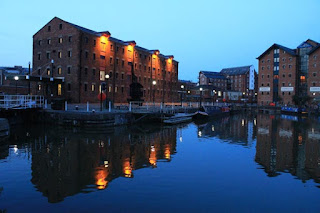 Sunday was spent looking for water filters for our water jug. Eventually we got some from Boots. After lunch we walked around the dock and went into the Waterways Museum to see the changes made in the refurbishment. We could see very little change, but we still enjoyed the visit. I went out later on with my camera and took lots of snaps. 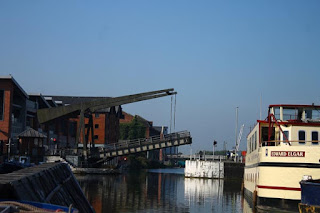 This morning (Monday) we left Gloucester docks and headed off into the wide blue yonder, well that was after we went shopping at Aldi for food. On our return we did the loo thing, got rid of rubbish and topped up with water. The we set off. 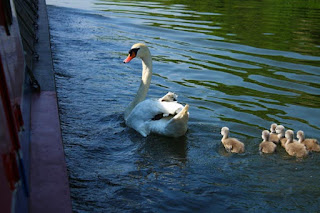 The bridges are all operated for you, so I had nothing to do, but make coffee and take photographs. 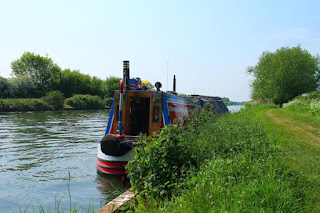 We are moored up in the countryside. Not sure if we will move tomorrow or not, but whatever I hope I will see you on the other side.