Where did all the water go? 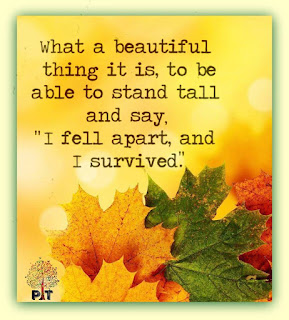 How has your day been?

Ours has been one of being on the tilt. It all began after we got up this morning, when a lot of water began disappearing from beneath us and all the other boats in the Arm. We measured the drop and it had gone down by Twelve inches and was to drop further. We sent a photograph and an e-mail to our local C&RT man and he got back to us. They were going to send some water down. Other boaters rang C&RT asking for water. Of course these things take time. 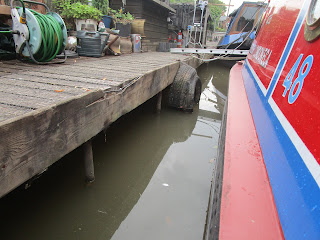 For us the gangplank had to come out and I kept pushing the boat our further and further. 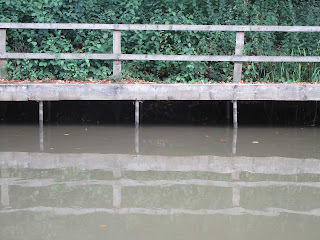 By mid afternoon the water level was getting dangerously low for some of the boaters in the arm. I had pushed us out as far as I dare, to make sure we were not listing. 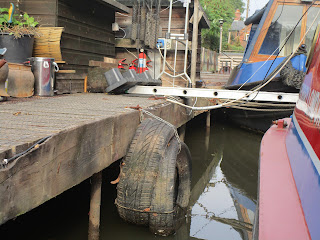 The problem we have is, both Cape Locks leak. Last Winter C&RT repaired the top lock at Cape, but it is still leaking. The middle pound, is losing water into the bottom lock, which is also leaking, so when the pound is down they take our water to fill it in the mornings. We also had at least four boats leave the arm this morning and they were heading down to Leamington. I guess it was a perfect storm for the water levels to drop so drastically. Another problem we have is boaters come up through Cape, wind and go back down, so I will leave you to imagine the rest. At the moment as I type this posting, C&RT are trying to get the water level up, but I am keeping us out overnight, because we do not want to be on the tilt overnight.

In between moving the boat out, I helped out with sorting the teddy tombola and raffle prizes for the forthcoming Heritage Weekend. Teddies got number stapled to their ears. I did apologise to them before inflicting any pain. Jack and I are so ahead of the game it is brilliant. Now we are just hoping the weather is kind to us. Sadly Shrek the horse will not be with us, because he is poorly, which is such a shame. But we will have a lot of fun anyway.
It has been a funny old day, but we will see what tomorrow brings.