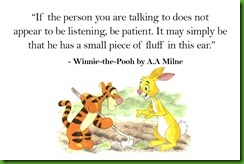 It has been wow Wednesday for me. This morning we woke up to sunshine bursting through the portholes of the pigeon box in the engine room, which bode well for the day ahead. It felt again like summer.

Keith headed off food shopping, whilst I got on and painted our flue pipe, which has caused us hassle one way or another. 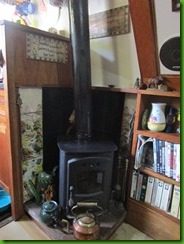 This is the flue, which had to be cut on half to get rid of the tar and soot, which was blocking the pipe so badly, it was setting our carbon monoxide alarm into a frenzy. The flue having been sorted out is as you can see back where it belongs and has had a coat of paint, so we are now ready for the winter.

Today the OVO tour of Britain cycle race was coming to Warwick. They were due to come past us at around 12.15pm, so I was out with my camera at 12 noon, to get a reasonably good position to photograph the cyclists which included Chris Froome and Geriant Thomas. 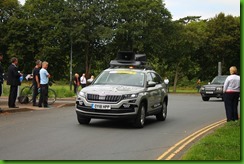 The announcing car came through letting us know the cyclists were on there way. 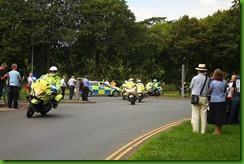 There were plenty of policemen on motor bikes. 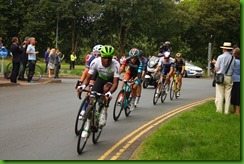 The first six riders came through on their own. 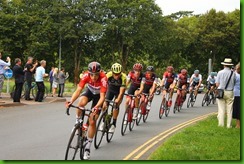 Following on a couple of minutes later was the peloton.

Team Sky with Froome and Thomas in there somewhere.

It was a magnificent sight, and so nice a lot of people had taken the trouble to come out and cheer them all on. I certainly got some lovely photographs and enjoyed the whole thing. The cyclists were due to finish in Leamington-Spa at around 3.30pm.

After lunch, I went out with the arms administrator to get lots of lovely goodies for the weekends heritage weekend. We are all sorted now. The only thing that can let us down now is the weather.

I am pleased to say we have our water back in the arm and the gangplank has gone, much to the joy of Paddy because he is none to keen on it. We hope the water levels now stay up.