Over night we had a lot of rain, even when we woke this morning it was still raining heavily, which is just what the doctor asked for right now. I just hope that the south got some of the wet stuff as well?

I got the boat ready for the off this morning, taking down the TV aerial, putting the exhaust chimney stack on and the Klaxon, all this was done whilst waiting for Keith. Whilst I waited I could not help but notice all the worms that had come out of hiding after the over night rain.

Would they go around each other?

No they just carried on their way over each other. The bi rds would be having a feast today with the amount of worms about. 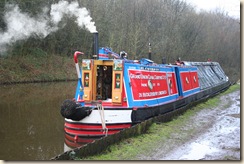 With the boat ready for the off, we left our over night mooring at 8.50am.

First swing bridge Higgins Clough out of the way, it was on to the next.

The lift bridges have to be opened with a windlass, which takes an age to wind up, this did not impress my back to much, but I still managed to get the job done.

The sun came out as we approached the Marple Junction, showing off the hills in the distance.

We turned on to the Macclesfield Canal and said "Goodbye" to the Peak Forest Canal for this trip.

Just as we made our way towards Goyt Mill, we noticed fishermen along the towpath, there was a fishing match taking place. Each and everyone of the 25 fishermen said good morning.

It just goes to show not all fishermen are miserable beggars. Their competition was on from 10.15am to 3.15pm.

We passed by the deer farm, where there was only a buck and a doe out in the field.

A boater has found a great use for an old pill box, they have made it into a shed.

At High Poynton we passed NB Sanity Again and just a little further on Historic Blue Top Anne, but Stuart was not around, so we have missed him this trip.

We made it to Adlington at 12.45 and moored up on the same stretch we had moored up on when we were heading in the other direction. The TV aerial has gone up so we can watch the highlights of the first F1 Grand Prix of the season from Australia. Because Sky now has F1 we will not be getting all of the races live grrrrrrrrr. Keith was going to tell me who won it, but I told him not to, as I wanted to watch it.

Another good day, so here's to tomorrow when we will head for Bosley Locks I expect.