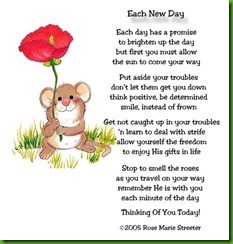 Bank holiday Saturday and it did not bode well for painting, with a dull sky and a wet boat from the overnight rain. There was a distinct drop in temperature overnight, which was still felt as I stepped off of the boat. But this is a woman who will not be deterred from her task and my task was to rub down the galley doors, undercoat the green and turn it red and then to put a coat of varnish on the wood. Out came the trusty mouse and so the job began, with fingers tightly crossed that it did not rain again for the day, because once the job was started, there was no going back. Doors rubbed down, Red undercoat and varnish put on, it was coffee time, before putting the second gloss coat of Moonlight White on the galley ceiling. Although I say it myself, it looks darn good and so much brighter.

With the painting done for the day, I set about making a Cornbeef and potato hash pie for lunch. With the temperatures dropping, comfort food is required and the salads can go back to the fridge draw for now. Of course it is likely there will be some more nice weather before we snuggle up for the Autumn and Winter.

Have you ever felt discombobulated? Has life thrown you a curve ball and you do not know what to think or do? This is happening to me at the moment. I will probably fill you in on the details, when I get them straight in my head and life.

Saturday ended with us watching the film ‘About Time’ starring Domhnall Gleeson, Rachel McAdams and Bill Nighy. If you have never seen it, I can recommend it. About Time is a 2013 British romantic comedy-drama film about a young man with the special ability to time travel who tries to change his past in order to improve his future.

Sunday morning dawned and it was dry but cloud until 9am. I got Paddy walked before the rain began to fall and I had to shut the galley windows up. No painting was being done, but I did cook an Indian Butter Chicken dish for lunch, which would be eaten with rice. I was also going to bake some cookies and had worked the butter and sugar together. I then began to add the eggs. I have always broken the eggs into the butter and sugar, but after what happened that will have to change. I broke two eggs into the mixture and then the third egg plopped into the mix and I immediately new something was amiss. The egg did not look right and I am pretty sure it was going off, so I had to ditch the whole mixture. So note to self: Break all eggs in a cup first to check them. You never stop learning so I am told.

With raining falling all day, there was little to do but to watch tv and crochet, well that was until a friend came a calling for a couple of hours. We drank coffee and nattered, before it was time for her to be on her merry way and I returned to crocheting and watching the tv. The one joy of a bank holiday is you get plenty of films to watch.

Monday morning and it was dry hooray. The sun did eventually try to poke its head out through the heavy cloud, but it never stayed out for long. With the air still damp from all the rain on Sunday, I did not do any further painting, but more crocheting did get done. 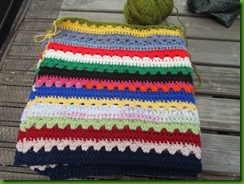 The new blanket is coming on a treat. With all this crochet going on, I think I may have crochet thumb, because my right thumb joint is very sore, so I will have to keep an eye on that. Now I thought there was no post on a bank holiday, so I was a little surprised to find a cd I had purchased on Ebay had arrived. I bought Paloma Faith’s Fall to Grace cd for £1.40 with the postage being free. When I checked the packaging the postage had come to £2.35, because it was 1st class, signed for. So the person selling the cd was well out of pocket. Why would you do that, I ask myself and I ask you? Anyway I love the cd. I have really gotten into Paloma Faith’s music of late, so much so that I have sent for another cd of hers.

Bank Holiday Monday drew to a close with us going out for a meal with boating friends. We went to The Cape of Good Hope and I can totally recommend their pies, they are amazing as was the rest of the meal. The company was so good we spent 4 hours nattering, laughing, eating a drinking without even realising how quickly the time had flown by. Whilst to get to the pub we walked along the towpath in the daylight, by the time we left the pub it was dark and neither of us fancied the towpath route so went via the roads back to the arm and our home. Paddy was fast asleep in his bed and did not even know we were back. Bless him he is an old man and needs his beauty sleep.

So that has been my Bank Holiday Weekend. How was yours?