End of another week. 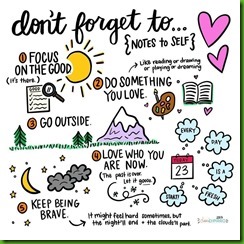 Yesterday you will recall me saying that our fires flue went off to be sorted out and we have been left with a empty space, well it got me thinking this morning whilst drinking my morning brew. The thought was to make the most of the fact that the flue pipe was not in place and to therefore do some decorating. 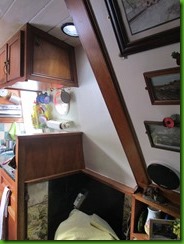 I never do anything by halves and so once the morning chores had been done, I began by wire brushing the chimney collar. I then painted it. I then removed the pictures and bits and bobs which were hung around the fire. I rubbed down the wall, ceiling and woodwork with my trusty mouse sander. The hoover then had to come out get rid of all the dust. Paintbrushes, paint and varnish at the ready. I began with varnishing the woodwork with a clear matt varnish from Wilkinson’s. The cream paint for the wall, we have had for years, but the tin although rusty was fine and so was the cream paint inside. With that done, a much needed coffee was called for, so with Keith doing his railway, I stopped painting and made the coffee. 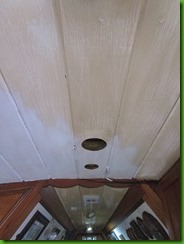 When living on a boat with a solid fuel stove, everything gets stained by the smoke, but oh my word, I did not realise it was this bad. It looked like we had been smoking sixty cigarettes a day for years. Neither of us smoke, so this was purely from the solid fuel stove. Mind you it has been some years since I have painted the ceiling. Again I used my mouse sander to rub the ceiling down, before putting the first coat of paint on the ceiling. Tomorrow I will second coat the ceiling in the galley and I can already see such a difference. It of course now means I will have to paint the ceiling in the saloon and bathroom next.

Painting all done for the day, I cooked lunch and then settled down to finishing my first crochet blanket for the Border Collie Trust. 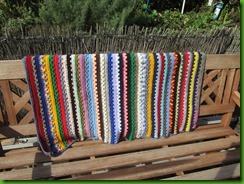 I will be sending it off next week and I hope that which ever dog has it they will love it.

Our day has been a day of sunshine and showers, so it was just as well all my work today was inside.

It is the Bank Holiday Weekend, so have a good one.