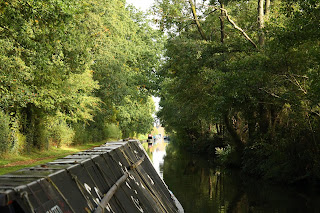 Last night I slept like a log, after having done the Wolverhampton 21. I did however wake up early hours, because Paddy was on the wander. I have no idea what he was doing and I did not get up, because I thought he would end up going back to his bed eventually. The next thing I knew it was 6.30am and time for a brew. The radio went on and the kettle whistled, letting me know it was ready. Sat in bed drinking our cuppa. We listened to BBC WM and all the goings on in radio land. I am not a huge football fan, but I will sit and watch a match occasionally, or the world cup. This past couple of weeks we have been listening to BBC WM sport and the local matches. Last night it was Aston Villa v Preston and it ended in a three all draw, after Villa had been leading 2-0. Anyway on the sports report this morning, the talked about the result and to my annoyance they also announced that someone in the crowd threw a cabbage at Aston Villa's manager Steve Bruce. This was a so called fan. What is this country coming too, when people feel the need to throw missiles at football managers. Ok Aston Villa are not doing so well at the moment and Steve Bruce is coming infor all sorts of stick by the media, which I do not agree with. But to throw something at the man is disgraceful. I had a cooking apple thrown at me, whilst we were on the move and so I know how much it hurt when it hit me in the temple. I am thankful that the cabbage did not hit Mr Bruce. We get to listen to fans ringing in with all their advice and rants and honestly some of them sound like they are baying for blood. Real fans would support their team and manager no matter what and they should always back their side. I find it all very sad.
Up and about, Paddy got his first walk and then his breakfast. We left the overnight mooring at 8.20am, with a fine drizzle beginning to fall. The cloud was very low to begin with. 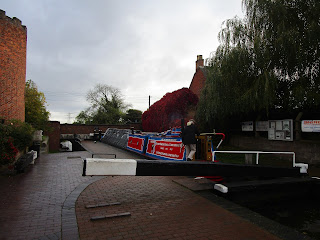 We had seen no boats on the move until we got to Gailey. I love the roundhouse there.
As we got closer to Penkridge we began to see more boats on the move, which was nice because it meant I could leave the locks ready for the oncoming boats. 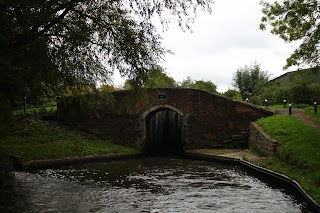 Autumn colours are beginning to show themselves. The reds, golds, browns and bronzes are beautiful. We also saw a few squirrels, herons and a kingfisher. There is nothing nicer than watching the wildlife as it goes on with its day and it always puts a smile on my face. 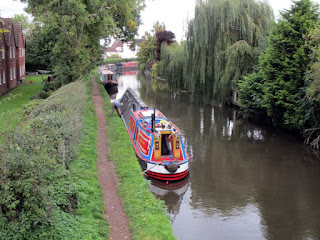 We arrived in Penkridge at 11.40am and moored up near the Cross Keys Pub. After lunch, we walked into the village, as we wanted to go to the market. We came back with a tray of Por, Chilli and Garlic Sausages, a pair of Kays shoes from one of the charity shops and a toy car, which Keith wants the tyres off of for his railways layout.
Back home and a much needed coffee was made. The rest of the day is going to be about putting my feet up until dinner time.