It was a bright start to the day with the sun shining through the pigeon box portholes, but it did not last.

Having walked Paddy down the canal to big lock, it was back to the boat for breakfast and a cup of tea. Keith put the generator on at 9am, we do not like starting it up to early when moored up at festivals, because not everyone gets out of bed early, sometimes we even wait until we hear others start their engines etc. Whilst the generator was running, Keith printed off the registration forms for the Middlewich Festival and the Shackerstone Festival, which we are going to later in the year. With the forms printed off and the batteries charged, we closed the boat up and head off up the towpath to the town. 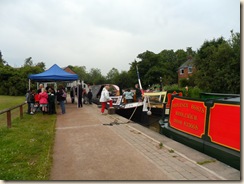 On the way we met up with Phyllis and Sue Cawson, who were helping out with a school party who had come to see Saturn. After a quick chat, we said cheerio and headed off. 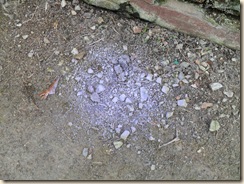 Along the towpath we noticed that someone had been going along spraying dog poo with purple paint, which had been left on the towpath and grass. It certainly highlighted it so people did not step in it. 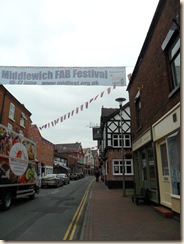 Middlewich is still decked out in bunting from the Jubilee and looks very festive for the coming weekend. We dropped off the registration form to the council offices, picked up our program, I then wanted to pick up a couple of items, whilst in the town, one of them was a net curtain from a charity shop, which I saw yesterday. I wanted it for the galley doors, so that when I have the perspex in, I can let in the light, but shut out the prying eyes, which love to stare through the window for some odd reason. I know they would hate it if I went to their homes and stand in front of their kitchen window and stare in at them. 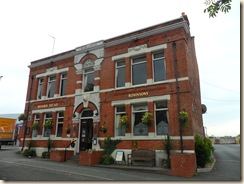 With purchases made we went and found The Boars Head, where we would be having a Hotpot Supper, but we needed to book to make sure we were included in the evening. The Boars Head Hotel began life as a coaching inn and has been dispensing hospitality for some 200 years and it really is a stunning building, we are looking forward to trying the beer. Everything done it was back to the boat for some lunch, but that did not take place until we had stood and had a natter with Roy off of Gerald No13. All through the morning the rain had been threatening, but after lunch it came with force along with some huge claps of thunder. I sat and had a nose through the festival program and saw that Eddi Reader would be appearing at the festival on Sunday 17th, but we will not be here to see her sadly. For those of you who do not know who Eddi Reader is, she was with the group Fairground Attraction and did the fantastic song "Perfect", which I love to this day. Dang I am gonna miss seeing her grrrrrrrr.

Well it is now almost 5pm and time to think of dinner, feed the animals and then settle down to another night of football, so have a wonderful evening everyone.