Orchestral maneuvers in the dark.

Yes I know the title sounds like a musical and yes it was the title of a song by OMD, but that was the first thing that came to mind in the early hours of this morning. I was woken at some disgusting hour by the sound of heavy rain on the back cabin roof and because I was wide awake I lay in bed and listened to the different sounds of the rain. As the wind drove in the rain thumped hard on the roof, then top toed across the roof as the wind dropped, every now and again a large drop of rain would ping off of the mushroom vent like a tingling of a triangle (not sire if they have them in orchestras anymore, but they did when I was a child LOL). There was something very orchestral about listening to the rain, and eventually I did drift off to sleep with the rain music. Now I can see why they make CD's of such music to make you relax.

No need to get up early, so I did not get out of bed until 8.45am, and I would not have done had it not been for Paddy who needed a tiddle. The boat moored behind us was on their way just before I stepped off the boat, I heard the lady of the boat summoning her husband to get a move on, because others were on the move, so maybe they were travelling with other boats.

It has been a cold and wet day as forecast by the weather people and despite the fact that it is June, I have lit the saloon fire as we are having showers tonight. 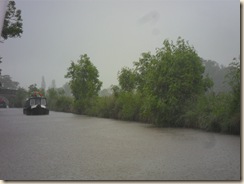 Boats of all description have been coming past us today and all the occupants have looked like rather sad drowned rats. Not a good day to be on the move for anyone, so we are so glad we are not moving. As the day has worn on the wind has really gotten up and is now blowing a hooley. For lunch I made some homemade soup with left over chicken and vegetables, which went down nicely on such a rotten day weather wise. I have yet to decide on what we will be having for dinner later, but it will be something warming. Just had a boater stop for some firelighters and kindling, the gentleman looked cold and wet. The joy of not moving is I get to catch up with internet stuff as we have a good signal, and I can sit with my feet up and watch movies, so what more can a girl ask for?