On Friday having settled at our mooring at Marbury, we thought we would walk into the village of Marbury to see if they had anything going on over the Jubilee weekend, as we had been told by a local gentleman that he thought The Swan Inn was organising a tea party. 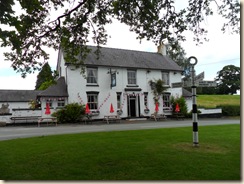 When we arrived outside the pub, which was all decked out in bunting a local lady was putting up bunting along the hedge and a gentleman was strimming the hedge overlooking the mere. 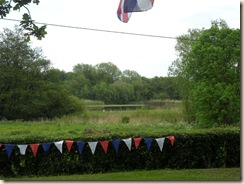 We sat on the bench beneath the old oak tree, before deciding to pop into the pub for a half, which actually turned into a pint and half of Station Bitter. 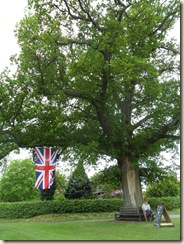 We got chatting to Lauren who was helping out behind the bar and who lives locally, she told us there was a tea party on Monday, which would be held on the green in front of the pub, or if wet in the pub itself. 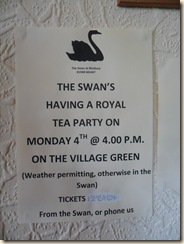 So we thought we may go along and join in. We also booked a table for lunch on Monday at 1pm, to make a day of it. 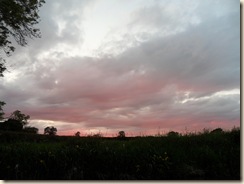 Friday evening we were treated to a pretty sunset. Red sky at night shepherds delight, so I was told as a child.

Saturday morning it was drizzling, so with no prospect of doing any paint work on the boat outside, I decided to turn my attention to the inside. We had bought the paint for the galley and saloon some time ago and now it was time to get on with the job in hand. We stripped the walls of pictures and equipment, Keith took the porthole inserts out and I rubbed them down and gave them their first coat of satin paint. 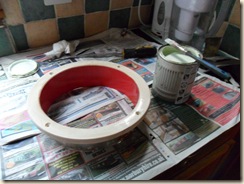 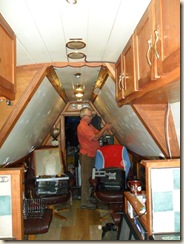 We then got on with filling the holes where the pictures had been, because Keith wanted to rearrange many of them on his side. 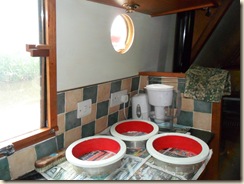 After a lot of preparation it was time to get the first coats of paint on the galley and saloon walls. 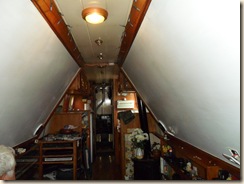 I painted the saloon and Keith did the galley for the first coat. With the paint being so quick to dry, after lunch I got a second coat on both the galley and saloon, because Keith's back was beginning to moan, my shoulder and wrist were none to happy, but the job needed to be done. The galley would need a third coat, but the saloon would be good to go for putting the pictures back up. The rest of the day saw us watching the TV and some of the Jubilee celebrations.

Sunday well what a washout. I really felt for anyone involved in the 1000 boat Jubilee cruise down the Thames, because the weather was foul pretty much all over the country. It rained non-stop all day at Marbury and I could not help but feel for the hirers cruising past us. At one point they were queuing to go up through Marbury lock, all of them looking very soggy indeed. I on the other hand was nice and snug inside the boat. It was the day to paint the saloon ceiling with Moonlight White gloss, Keith unscrewed all the lights and I rubbed the ceiling down. The last time it was painted was almost five years ago when the boat was built, so I was expecting it to be a little stained because of the fire, but it was worse then I expected. You know what pub walls used to look like after all the cigarette smoke, well that was how bad it was and Keith and I do not smoke, but the stove does. As I brushed the first paint onto the ceiling, I could really see a marked difference, it was now so bright I needed by sun glasses on. It is amazing how our eyes get used to things and despite the fact I thought the ceiling looked bright, it most certainly was not. First coat of gloss done, Keith got on with putting some of the photographs and pictures back up on my side of the saloon, I got on with the third coat of Lucid Morning satin paint on the galley wall, finishing off the walls for now. I am very pleased with the colour, it really brightens the galley and brings out the colour of the green tiles. By the time I had done all of that it was time for some lunch and a sit down. After lunch we turned out attention to putting Keith's boating trophies back up on his side of the saloon. Keith wanted to rearrange them and screw them to the wall, this took pretty much most of our afternoon.

There had been a steady stream of hire boats coming past us all day, some going slower than others, but all the steerers had one thing in common they all looked like drowned rats.

After another busy day of painting, we settled down to watch more of the Jubilee coverage on the TV, which I have to say has been fantastic. Unfortunately we did not get to watch the coverage of the boats going down the Thames because we did not have BBC1, but we did see a little of it on the news and it looked amazing. I am quite sure everyone had a magnificent time despite the weather, which saw six people off the boats go to hospital due to the cold.