Just a short jaunt for us. 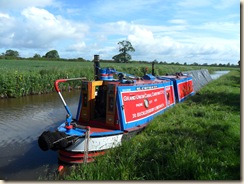 I got the boat prepared for the off. 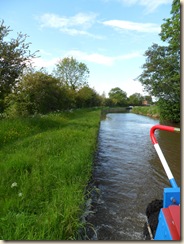 10.45am we left our Jubilee weekend mooring and set off in the morning sunshine, with another boat behind us, which was just coming out of Marbury lock as we set off. 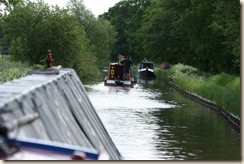 We soon found ourselves behind a boat, so we were now in a three boat convoy. 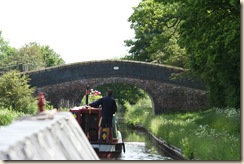 As we approached bridge 22, we were right up behind the boat in front, so having cleared the bridge he pulled over and waved us past, with the boat behind us following on. 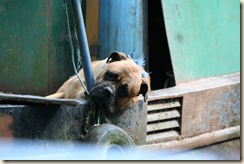 One very chilled out dog. 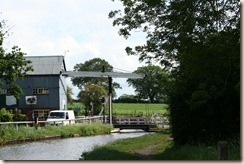 I was about to step off the boat at Wrenbury Lift Bridge, when I became aware that someone was already in the process of working the bridge for us, as the bridge rose we were waved through. As we passed under the bridge I realised it was Debs off of NB Georgina, so I said "Thank you" and we went on our way, the plan was to moor up in front of the caravan and camping park, which belongs to the Cotton Arms Pub and even though the moorings were busy, there was enough room for us to get in. Having moored up, I took off to the shop in the village with my rucksack to pick up a few items, because I only had a couple of potatoes left and we were in need of some vegetables. Of course whilst there I picked up a few extras which will always come in handy. On walking back to the boat past the Cotton Arms I discovered that on a Wednesday and Saturday they have a lunch club, where you can have a starter and main meal for just £5, now that is a bargain and no washing up. Back on the boat, I made us some lunch and we settled down for the rest of the day doing very little, because neither of us had a decent internet signal, so there was no hope of us uploading blogs or photos. The signal situation along this stretch is very poor for T-mobile. With a few boats coming and going, it was clear who was slowing down for moored boats and it was not the shared ownership boats. As the afternoon crept into the evening, the rain began to lash down as forecast, but I was nice, dry and cosy and with no where to go, we sat and watch a couple of films on Film4. Another wonderful day afloat.