We had not planned to stay but here we are at the Middlewich Festival for the first time and loving it. Boats are arriving and despite the weather being extremely windy all day, it is not going to spoil the weekend ahead. Our bunting sale board was rocking and rolling on the roof of the boat in the strong wind, so we had to tie it down, then it started banging on the roof, so I ended up putting some material under it to soften the noise. During the late afternoon Brian and Ann Marie arrived on NB Alton with our new button fender for the stern and as our gas had run out in the morning, we also bought a gas bottle off of them. For anyone needing gas in the area, their bottles are 13kg and £25. I managed to get a little bit of painting done to the stern, so the boat looks a little tidier for the weekend, I also got the brass polished and the engine brass done as well. Our festival weekend really began Thursday night when we got together in The Boars Head with Sue Cawson off Thea, Annie and Jim Macdonald off Elizabeth, Roy off Gerald No13, Julia and Stewart off Just No2 and Helen and Jimmy off Border Reiver. A great time was had by all as we laughed, chatted and of course drank a few pints, well in my case a pint and half, that is all I wanted as I am not feeling my best at the moment, it is a culmination of the Menopause and IBS, which has been playing havoc this past few days, but I will live. After a lovely time in the pub, we walked back to the boats in the rain with Annie, Jim and Sue said our goodnights and retired to our boats, in fact we retired to our bed as we were both tired, after all it was 10.30pm and for me past my bedtime ;0).

Friday and I was awake on and off all night listening to the heavy rain and wind battering the boat. We were certainly rocking and rolling for most of the night. Having managed to fall asleep, I woke up at 7am to see bright sunshine pouring into the boat, which was a very welcome sight, sadly it did not last. After breakfast, Keith and I oiled the new button fender and fitted to the stern where it sits proudly, our old fender lasted 5 years which is good considering the work it has done. After a coffee I set off to find some boating friends, who I knew were moored up above Wardle Lock. 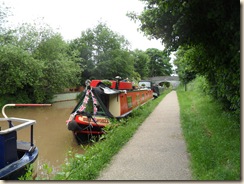 I found Tracey on NB Billy Whizz and Rita and Scooby on NB Festina Lente. 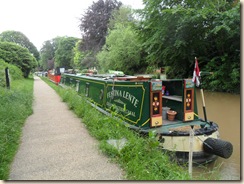 Having enjoyed a coffee and a catch up chat with Rita and Scooby, I got back to the boat just before the heavens opened, to find Keith chatting to Jane and Mike, who we have become friends with. Mike very kindly took Keith and I out whilst on the Llangollen BLOG. We stood nattering for a while and then the heavens opened, so Jane and Mike went on their way, we would have invited them on to the boat, but they had their dog with them, we got back into the dry. 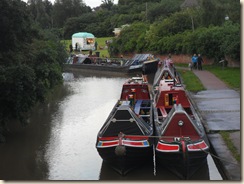 The evening was to be spent in The Boar's Head, as we had booked in for the boater's supper, so at 7pm we shut the boat up and walked up to The Boar's Head got our drinks and went upstairs to the function room, where we found a table and joined Roy off of Gerald No13, I then invited Margaret and David who are moored in front of us on Its A Blessin to join us as they were on their own. The boater's supper which was to be hot pot arrived and in the program it was said to be £4.50, but when we paid for it, it had gone up to £5 each, many of us at the supper were disappointed by the meager portion of hot pot we got for our £5. I think I only had two pieces of meat in my dish, which was no bigger than a cereal bowl, the rest of the dish was potato, carrot and swede. We were given some bread and butter and a small dish of red cabbage and beetroot, which had to do five of us. In all it was disappointing. After supper we went downstairs to join in with the musical get together, which saw all sorts of folk with all sorts of instruments jamming, whilst England were playing Sweden and we all know how that match ended, we won yayyyyyyyy. Apart from the supper we had a fantastic evening chatting with old and new friends and listening to some amazing music. We eventually left the pub at 11pm.

Saturday the weather did not look promising, as there were dark clouds overhead, but nevertheless we made the most of the day. 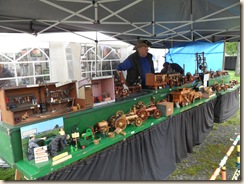 We had breakfast, did all the usual morning stuff before heading off to see what there was to see. Most of the stalls were setting up or set up, so we had a wander around them before buying a couple of items, which included some wonderful cheese. It was nice to see so many people we know. 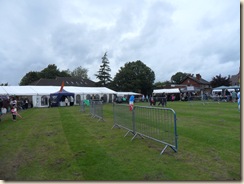 The main field looked a little quiet early on, but this gave us a wonderful chance to see everything before the crowds arrived, which they did as the morning wore on, despite the weather doing its best to scupper the event. 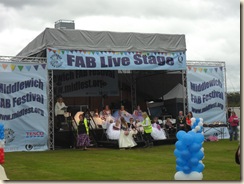 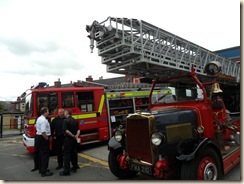 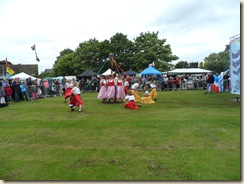 When you come to an event like this you must except the fact that the weather may be against you and at times it was, but as the afternoon drew on the weather did improve a bit with some brighter spells, which was great because so many people had put in such a lot of hard work to get this event off the ground. 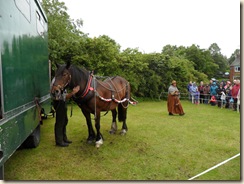 Keith and I had a wonderful day, just pottering and chatting as we went. On our way back to the boat we met our good friend Sheila, who had come to see us, so we all went back to the boat for a coffee and a good old catch-up on everything. A good day was had by us at any rate.