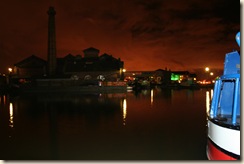 Yesterday afternoon, having moored at the top of the locks, Keith and I went back into the museum to watch three short films they show, which we had not found time to see over the weekend. Afterwards we got chatting to Martyn about our broken cratch strap and he said he would chat to John who may know where we could get some. As it turned out John found us some at the museum, and so we gave the museum a donation in order of payment for the old fireman's hose. Everyone at the museum is so helpful and welcoming, we were going to be sad to go. Our last night at the Ellesmere Port Museum was spent at the top of the locks on the 48 hour mooring. The sky looked like it was on fire.

This morning the sun was out and we were greeted by a chilly start.

8.20am we were ready for the off. The cruise from the port is pretty uneventful, well that was until the heavens opened. we had rain, sleet and hail for about 15 minutes, I ducked down into the back cabin and left Keith to steer. Despite the weather it was onward towards the Chester zoo mooring, where we saw a boat in front of us, so were ever hopeful that they would be doing the staircase locks at Chester and we could share. We then passed another boat who pulled out behind us, so we had the best of both worlds.

We had arrived back in Chester and made our way to the staircase locks where, Jane and Geoff on River Phantom were going up the locks, so we joined them to do the climb.

We were joined by Alex, who came to give us a hand. Alex moors down in the basin as he is attending Chester college. His help was very much appreciated.

Jane and I did the gates, whilst Alex was happy winding the paddles up and down for us.

We exited the top lock, thanked Alex for his help and also Jane and Geoff for allowing us to share with them.

We passed by the city walls and under sighs bridge, before finding a mooring opposite the Mecca Bingo Hall, because we needed to go food shopping at 11.45am, Jane and Geoff also pulled in for shopping. We flew around Tesco and got what we needed, in fact we did a complete shop in 30 minutes, which must be a record for us. Back at the boat, we saw Jane walking back to their boat, they were going like us, so we agreed to carry on sharing locks.

1pm we left Chester and headed towards Hoole Lane Lock, Jane and I stepped off our boats and went and worked the paddles. The spindle on Jane's side came off in her hand as she wound up the paddle, so I took photos and we have reported it to British Waterways.

There was a boat waiting to use the lock, so I passed on the information to them, so they could take care when winding the paddle.

At Tarvin Lock the cottage is up for sale.

So if you have a spare £495.000 it can be yours. It is beautiful and over looks the Cricket ground. Before we knew it we had done the last lock of the day Christleton Lock and were outside of The Cheshire Cat, Christleton. Luckily there was enough room for us to get in and we will be eating at the pub tonight. I thoroughly enjoyed working the locks with Jane, I reckon we chatted about anything and everything, the spooky thing was I used to live near Andover in Hampshire and Jane was born in Andover Hampshire, it sure is a small old world we live in.

The sun is out and all is well in my world.