A rather cold start to the Easter weekend, but it was not about to dampen our spirits, so once we had got the fire going in the back cabin, had breakfast and walked Paddy, Keith and I started to sort our sale goodies out and put them on the roof of the boat.

We decided not to put to much out, just in case the heavens should open, because the sky looked threatening for most of the day.

As the morning wore on we were beginning to think no one would bother coming down to the bottom basin, but gradually people did appear, I think because it was so cold they tended to stay in the buildings. We were fortunate to sell a few items during the morning.

I took the opportunity to go off and have a nose around, whilst it was quiet. In the island warehouse they had craft stalls, books and the real ale bar.

They also had the Shanty Singers entertaining the visiting public.

All over the site, there was something going on for everyone.

More boats arrived from Chester as the day progressed, which included Brian and Ann Marie on Alton, who were very welcome to those needed coal.

I have to say that those people working at the Museum have worked incredibly hard to make us all feel so welcome. Martyn and his partner Sue, worked their socks off yesterday making sure everyone had all they needed.

When I got back to the boat, it was then Keith's chance to go off and see who and what was a around. As the afternoon wore on it was clear that we were not going to sell anything else as the weather was turning colder, so at 4pm we took the decision to start packing our goodies away. Keith stacked the rag rugs and blankets in the back cabin on the side bed and this meant Marmite just had to try out the new high rise bed. 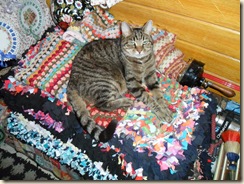 As you can see she made herself at home and did in fact sleep there all night.

With our stock put away, we went on the wander to catch up with fellow boaters that we know. It has been a real treat catching up with Phyllis and Henry on Perch, they are such a mine of information and stories of the old days when they worked the boats. If they could write a book they would tell you how it really was, and not how it is told today. I so love chatting to Phyllis. We spoke to a lot of boaters before heading back to the boat, where I got dinner  made.

6.50pm we left the boat to go to a talk in the Rolt Centre, Mike Clarke was giving a talk on 'Canal Heritage - What should we be keeping?'. In fact the talk and slide show was mostly on how canals were started in other countries, such as China, Holland, German and France long before we started building them in England. It was only in the last 20 minutes or so that he talked about the England canals and what we should be saving or not bothering about. Mike does not believe that the the famous Pontcysyllte Aqueduct should have World Heritage status, which it was given in 2009. He believes there are more important things on the system which should be given more recognition. I guess we all have our own point of view on this subject. At the end of the talk a few questions were talked about, before everyone retired to the bar, where we enjoyed a couple of pints of Spitting Feathers from a local Chester Brewery. We spent the rest of the evening nattering to Terry, who used to own Darley and to other boaters. It was gone 11pm before we left the centre and walked back to the boat in drizzle. The back cabin was lovely and warm thought, and the thought of bed was even more inviting.

So far I am really enjoying my Easter at Ellesmere Port. Just wish the weather was a little warmer. As I type this, it is damp outside, so not sure we are putting anything out today, but we will see.