A couple of months ago, I received a message on my Facebook page from a friend in Canada to ask if she could use a photograph I had taken of Keith earlier in the year, when we went out for a trial cruise to see if he was strong enough to work the boat, after last years illness. 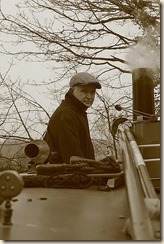 This was the photograph I posted. 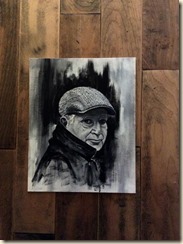 And this was her interpretation of the photograph. We were both so pleased with her capture of Keith.

Today Joanna Gooder came to see us. She is over in the UK visiting family and friends. 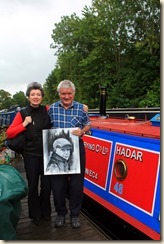 Both Keith and I were so excited to see the painting in the flesh and it was everything we thought it would be. Joanna has an amazing talent and a beautiful lady.

The plan is to get the painting framed and then hang it in the saloon.

A huge thank you to Joanna and we hope that we will see her when she comes over again next year.  We had a lovely time chatting over tea.

The Weekend is almost here.

No fainting with shock. Yes I am posting twice in two days. It is amazing I know, but hey I have a spare few moments so thought why not.

So the weekend is almost here and the weather is not looking that good, so I cannot see me gardening or painting the boat over the weekend.

This morning began at 5am with the other half waking me up. By 6am I was up making a cup of tea. We sat in bed watching the news and drinking our first cuppa of the day. There is something nice about just waking up gently and enjoying a cuppa in bed. The small things in life make me happy.

9.55am Keith had his dental appointment for his tooth extraction. I have booked into the practice for an appointment in November as we have decided we are not going back to our other dentist, due to the fact they seem to not know what they are doing. If you read yesterday’s post you will understand. I stayed with him until he was called in for the extraction, I then went to our now old dentist and cancelled our November appointments with a smile on my face. It was then I realised just how antiquated they are. Not only can you not pay by card, but they do not use computers even to book in, it is all done in appointment books and bits of paper, which in this day and age is in the dark ages. Now I am not one for modern technology, but this really did strike me as odd. Anyway they are no more and our new dentist is at the top of our recommendation list, especially as I met Keith on the way back to the boat and he was smiling, all be it with one less tooth. The dentist even gave him his bad tooth in a bag, which has never happened before. Keith highly recommended the dentist, so I will look forward to meeting her in November.

Back at the Arm, we called into the shop/office and the Meadow Grass Seed has arrived for the raised Wildflower bed from Kiss My Grass. I just love the name. So once everything has died down in the bed, I will get on and sew that. New stakes have gone in the orchard for the fruit trees as the old ones were to short.

I spent some of the afternoon photographing the new pod building, which is the Arm’s meeting place. 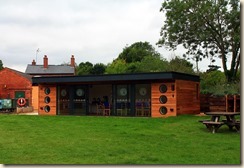 The building is for hire to business who want to hold meetings in a beautiful spot. All details can be found on the Trust Website. 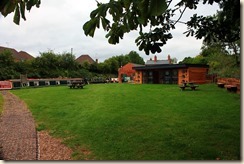 The building is a welcome edition to the Arm. When we have the Heritage Weekend we will be putting the craft stalls in the building.

My day has been a busy one, doing lots of little things, which included walking the dog three times, going to a friends cottage which is being restored and catching up with people I know.

Roll on the weekend.

I am still alive.

They say “Time flies when your having fun”. I would say time flies full-stop.

It seems an age since I actually sat down a wrote on my blog, so I apologise if you have been popping in and not seeing anything new. I will smack myself on the wrist once I have finished this posting.

Well what a time it has been since we arrived home to our mooring. I have been a busy little bee in the gardens. The Arms gardens needed some TLC when I got back, because they had not been touched in the two and a half months. I will leave you to imagine how huge the weeds were. I did a quick tidy up ready for the Warwick Open Gardens event, which the Arm took part in. We had over 20 people come through, which was fantastic. I really enjoyed nattering to visitors, many of them had never been into the Arm before, so they were very welcome and hopefully they will come back again.

Gardens up together, I had to give in and go and see our nurse practitioner at the doctors surgery, because I had been suffering from a feeling of something stuck under my ribcage and a painful Sternum, with a metallic taste in my mouth. I was given some Omeprazole to take for a month. I took it for two weeks, but things were getting worse, so I went and say my GP, who sent me off for an Ultrasound, as he thought I may have Gallstones. Within a week I had my Ultrasound and it showed no Gallstones, which was a disappointment in one way, because it would have been easy to sort that. I was told my GP would contact me in about a week with the results, but he rang me the day after my Ultrasound. He has no put me in for an Endoscopy to see if that offers up any clues to what is going on with me. I would not be surprised to find I have a Hiatus Hernia, but we shall see. It has been two and a half weeks and no appointment yet, so I keep taking the tablets and wait. But whilst I wait I am keeping busy.

September we have our Heritage Weekend and so I have been giving some support  to the Arm’s administrator, as she arranges everything. So far the craft stalls and other stalls are all booked. Music is in hand as is food and beer. We also have a model boaters coming back along with a reptile lady, who is bringing a skunk this time as well. It is going to be an amazing weekend on the 12th and 13th September. I am also having a stall, so busy making things for that.

Keith has been having more problems with his teeth. He went to see our dentist and was told he had an infection under a tooth, so was given antibiotics and they took an x-ray. On his return to the dentist, he was told the tooth was dead and so he needed either a root canal filling or an extraction. But and yes there is a big BUT they could not do it, because it was difficult to get to, so he would have to wait for an appointment to go to the Birmingham Dental Hospital. The last time they wanted him to go there for a different problem, the appointment never arrived. So you can understand how we both felt about this conclusion. What I could not understand was why could they not do the treatment, after all they are dentists. So having chatted about it, we sort a second opinion. Keith went off to see another dentist this morning and they did an x-ray and got the answer there and then, instead of having to wait. Yes the tooth is dead, ok so the other dentist got that bit right. But there is a huge infection under the tooth and a root canal will not work, so they got that bit wrong then duh. So the tooth has to come out, which is being done tomorrow. Not only that our new dentist is going to do the work. They cannot understand why the other dentist would not do the work and actually asked Keith if he wanted to put in a complaint. As of tomorrow I will be going to the new dentist as well.

The Arm has been buzzing with boats of late. It has been very busy today, with five boats coming in at once. We are full at the moment if boaters want bankside moorings, so it is breasting up room only, which is fantastic, because we welcome visiting boaters warmly. The Arm has some new residence which I will photograph tomorrow, so you will have to come back tomorrow and see their photographs.