A day out in Lichfield. 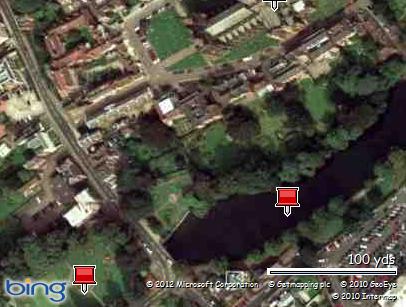 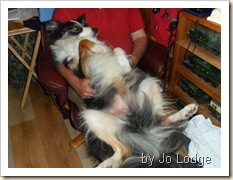 Paddy certainly knows how to relax. He loves a cuddle but can be such a fidget. Last night he lay on Keith's lap bits on view to the world and did not move a muscle for at least 15 minutes, which is a record for him.

Bedtime for me came at 9.30pm, I was tired and the TV pictures were becoming blur, which meant it was time for bed, so having woken Keith up from his slumber we headed off to get a good nights kip.

Woke up at 7am to a very humid back cabin and so with no hurry to get up, I made us a cup of tea and we sat in bed watching old episodes of Bullseye, the oldies are always the best. 8am it was time to crawl out of bed, take Paddy for his walk and have breakfast. Whilst I walked Paddy the generator went on to charge the batteries. Paddy met his match whilst walking up the towpath. In the field alongside our boat are some heffers, Paddy thought they looked like fun, so put his nose through the fence and the heffers then thought he looked like fair game so came over to say "hello", Paddy was off along the towpath with me in tow as quick as grease lightening. I have a feeling he will not want to say "hello" again.

Batteries charged, we locked the boat up and set off down the towpath to walk into Whittington to find the bus stop, because we were going to have a day out in Lichfield. Neither Keith or I have ever visited the city before, so were looking forward to it immensley. We walked to bridge 80 and got up on to the road, turned right and headed towards Whittington. We turned right into Brick Lane and a short distance up the lane was the bus stop.

The 765 bus was due at 9.41am, so we only had a 10 minute wait. What was reassuring was someone else joined us to wait for the us, so we knew one a bus must be coming. The bus fare for the two of us was £4.80 one way, which the bus driver said it was cheaper to do it that way, so we paid up and sat down. After a short trip we were at the bus station, we said "thank you" to the bus driver before leaving the bus and heading into the city. Neither of us knew what to expect and so we were both really pleased with what we saw. Lichfield is a stunning little city, its so clean and friendly.

The city is still decorated in bunting, flags and red, white and blue flowers and looked amazing. 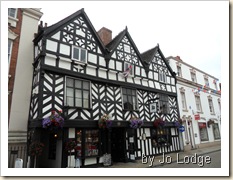 Having got our bearings, we were in need of a coffee, so went into The Tudor of Lichfield, a stunning tea house built in 1510 and has been in the same family since 1935. In 1936 Wilfred and Evelyn Burns-Mace and their son Jeffrey opened the old buildings as The Tudor Café and it has remained that way ever since. It is amazing to think that the building was here when Henry VIII and one of his wives Catherine of Aragon were around. The staff were friendly and the service very good.

After the much needed refreshments, we set off to explore the city. 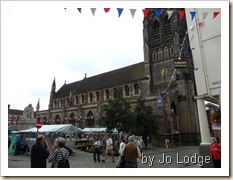 The market place, where a market is held every Saturday. Minster Pool was created in the 12th and 13th Centuries it is thought. 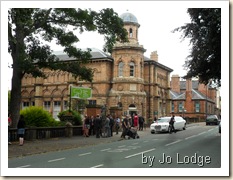 Just up from Minster pool is the Free Library and Museum, it was built in 1856 and is now the registry office. The registry office was doing a lot of trade whilst we were there, in all we saw three weddings. 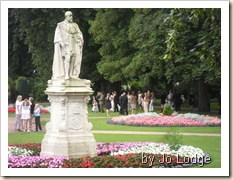 After the ceremonies, the wedding photographs were taken in Beacon Park's Museum Gardens. In 2011 the gardens had a complete transformation and really did look fantastic. 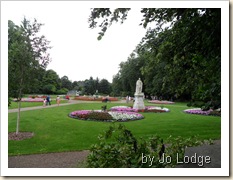 The fountain in the middle of the park was unveiled in 1871. The statues of Edward VII (1908) and a bronze of Commander E Smith (1914), Captain of the ill fated Titanic, were added in 1908 and 1914 respectively. It is a lovely place to have wedding photographs done. 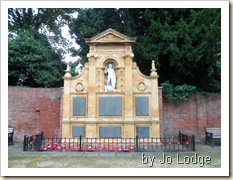 Opposite Beacon Park's Museum Gardens is the garden of Remembrance. 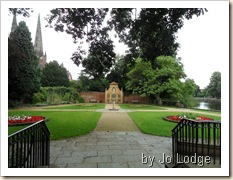 After World War I, the people of Lichfield wanted to create a memorial and so in 1919 the work began to lay out the garden. The War Memorial was designed by the prominent architect, Charles Edward Bateman, and created by local stonemasons, Bridgeman and Sons of Lichfield. later on there were new panels added to the memorial for those lost in World War II. In 2010 and 2011 the garden of remembrance underwent a lot of restoration and it is a real credit to all those who worked so hard.

Before lunch we walked up to Lichfield Cathedral.

The Cathedral was built c. 1195–1340 and in many ways is still being built because of the constant restoration it needs. It was free to go inside and look around, but we were only allowed to take photographs if we paid £2 for a permit, so of course we did not bother. I do not see why we should pay to take photographs when we can take them anywhere else for free.

The carvings are truly incredible inside and out and it is well worth a visit. There are monuments to the fallen soldiers of the Staffordshire Regiments, which made me feel quite emotional. The regiment has its own chapel within the cathedral which contains memorials, tablets and the old colours including those used in the Crimean War, Second Sikh War, Second Burmese War, Persian War, Indian Mutiny and Zulu War. 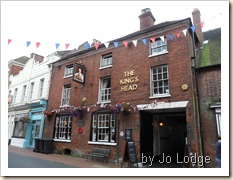 Time for some lunch and having just seen the memorials for the Staffordshire Regiments, it was fitting that we should eat in the birth place of the Regiment in 1707, when Col. Luke Lillingstone formed an infantry regiment of the British Army.

The pub has a wonderful atmosphere and the staff were very friendly. Keith and I both had roast lunches for £5.50 each and they were worth every penny. A must if you want a place to eat.

After lunch we walked to the home of Erasmus Darwin who was born 12 December 1731  and died 18 April 1802. His home tells of his life, loves and how he made us who we are today. He had an incredible insight in physics, chemistry, geology, meteorology and all aspects of biology. The house and garden is free to visit this year. 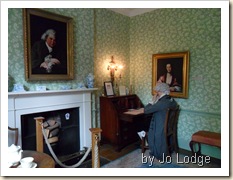 The garden has box hedging and Solidago, commonly known as Goldenrod. 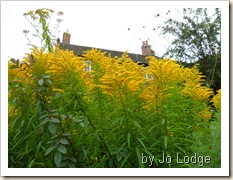 Both reminded me of the place where my Gran was in service. When ever I used to visit her, I would play in the courtyard veggie garden which had box hedges and lots of Goldenrod. The smell bought back so many memories of that garden and my Gran.

Having done the history tour, we walked back into the city to buy a few food items and some more fairy lights for the back cabin. I know not very traditional, but I don't care, I love them and being solar panelled it saves on the electric. We then walked to the bus station to wait for the bus back to the boat.

We arrived back at the boat, to find the rag rugs in the back cabin in a heap, Paddy and Marmite had clearly been partying whilst we were gone, but nevertheless were very pleased to see us, because Paddy was sat in the back cabin tail wagging and doing his funny yodelling, which is always does when he is happy to see us. Marmite meowed until we took notice of her, if I did not know better I would say she was trying to tell us all about her day, either that or how annoyed she was that we had left her alone with Paddy.

I have had the most wonderful day out and will spend the rest of the day with feet up and the TV on, well that is until the animals need feeding and of course we will need our dinner.