Saturday morning and the sun was not in real evidence to begin with, it was a cloudy muggy start to the day, but up early because I had painting jobs to do and wanted to get them done before the sun did come out and the heat got up.

Paddy got his walk and breakfast was eaten before I started by painting the new floor board for the back cabin, which Roger Fuller had very kindly cut out for us. 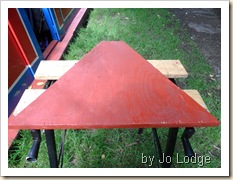 Whilst the floor board dried, I then went about rubbing down the cant on the back counter, which I had been wanting to do for a while, because the blue had been coming off in places for a while. 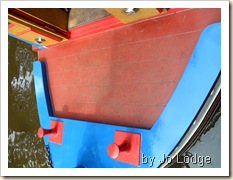 After rubbing the cant down and undercoating it, I let it dry for a couple of hours before painting on the first gloss coat, which was allowed to dry for the rest of the day. It was then time to paint the other side of the floor board, by the time those jobs were done, the sun began to appear, so drying time would be quick.

With hire boats and private boats on the move, I put our sale boards out in a hope that we may get some customers, but it actually turned out to be a quiet day on the sales front, but you have to be in it to win it.

I know I do tend to moan a lot about other peoples dogs, especially those who are allowed to roam and do as they please and I am afraid I am going to moan again.

I should say this is also other boaters dogs doing this. This morning a boater opened his front doors and allowed his dog to jump off the boat, the dog then preceded to walk to the next boat on the moorings and wee all over the boaters ropes.

When ever I walk Paddy past other peoples boats, he is always on his lead, because I do not want him to wee on other boaters ropes. There is nothing worse than picking up a rope that smells of dog pee. We have had dogs wee on our ropes in the past and even had one owner allowing his dog to wee up the side of the boat. He did not call his dog away or even say sorry.

At Wheaton Aston the mooring rings are set along way back away from the edge, so they are a prime target for dogs to wee on, that is part of the reason why we did not moor up with the rings but put our mooring hooks into the piling. It is just something I feel is not necessary and I think all dog owners should be a little bit more respectful, or maybe I am just being to picky.

The rest of Saturday like most of the past few days was spent watching the Olympic Games and oh boy were we in for a treat during the evening. Mo Farah what an amazing man and Tom Daley at 18 years old won a Bronze Medal in the Diving, which I felt so proud of for him, as he had been under so much pressure. By the time the diving finished I was ready for my bed and a good nights sleep.

Sunday morning and a few spots of rain could be heard tapping on the roof of the back cabin, but it did not amount to much. I also heard a Tawny Owl, not far from the boat. Keith and I were both awake just after 7 am so Keith got up and made us cup of tea and we sat in bed watching the Olympic news on BBC1, where Tom Daley spoke of his joy at winning the bronze Medal. It was wonderful to see his excitement of the Bronze when other athletes have been so despondent on winning a Bronze. Winning any medal at an Olympic Games is such an achievement and they should always be celebrated. No cooked breakfast for us, because we were going out for Sunday lunch at The Hartley Arms.

Paddy got his walk and thankfully there was no repeat of yesterday morning, with the dog being allowed to wee over another boats ropes. We had a leisurely wander along the towpath and back again not seeing another living soul, even though it was gone 8.30 am. After breakfast the sale boards went out on the roof and I got on with watching the Olympic Games.

11.50 am, Keith and I donned our Sunday best and headed off up to The Hartley Arms. 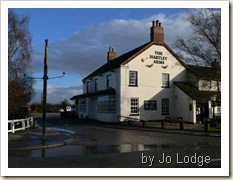 We had booked a table for the carvery lunch at 12 noon. Just as we walked to the pub, rain began to fall, getting heavier as we arrived at the pub doors. The Hartley Arms is run by Donna and Andy and wow their carvery lunch is one of the best we have ever had. We got our drinks and were shown to our table, we then joined a short queue for our carvery. There were five meats on offer, Turkey, Chicken, Pork, Beef and Lamb. Vegetables on offer were Cauliflower cheese, Carrots, Broccoli, Cabbages, Peas, Green Beans and Swede, plus Roast potatoes, mash and new potatoes. We also had Yorkshire pudding and stuffing, oh and not forgetting the gravy. Now that is what I call a concise carvery. Lunch was excellent as were the puddings we enjoyed afterwards, Keith had Treacle Pudding with custard and I had Apple Pie with Ice Cream. if you stop at Wheaton Aston and want the Sunday carvery, be sure to book because it got extremely busy and with the excellent food on offer I can see why.

Lunch eaten and enjoyed, we walked back to the boat in the rain. The TV is now on and we will be watching the closing stages of the Olympic Games I feel for the rest of the day.