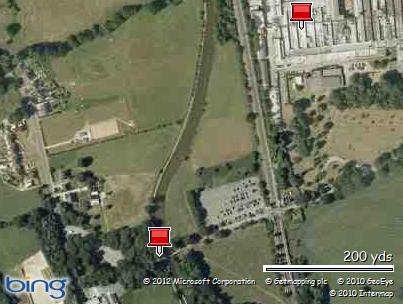 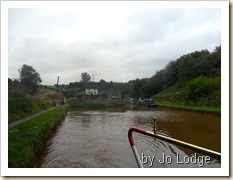 We left the Harecastle Tunnel mooring at 8.35 am with an overcast start to our day, but it was at least warmer than yesterday. Boats had been arriving to enter the tunnel as early as 6.30 am and the tunnel keeper was letting them through at 7.45 am, so maybe they were in for a busy day. 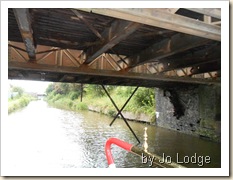 As we passed under bridge 128a, I photographed bits hanging off of it, and we have sent the photograph to C&RT, because it could be dangerous to boaters. We came past West Port lake, which we could not see much of due to the vegetation which has blocked the view.

We were then back in the land of the kilns and the Potteries. 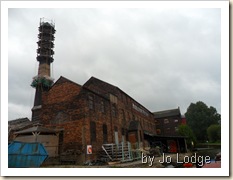 Middleport potteries chimney is having some TLC at the moment. 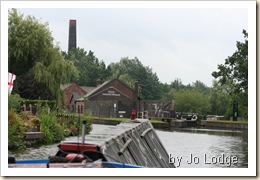 At 10.50am we arrived at Etruria and visited the water point and I emptied the toilet cassette. 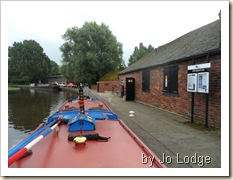 Whilst the water tank was filling, we met up with Andrew and Liz who were about to take Lindsey out to West Port Lake where they were going to entertain a group of children. We had a quick chat with them both, before getting underway once our water tank was full. Keith reversed the boat back to the junction and we moored behind a boat already waiting to do down the Stoke Flight. We were fortunate that there were lots of boats coming up. We descended the first of the Stoke Flight, I went down to wait for Keith at the second lock, where an Anglo Welsh boat was waiting to exit. I suggested to the steerer that he move the boat out of the lock and moor behind a boat already waiting to go up, so his crew began pulling the boat our by the centre line as Keith began to exit the top lock. The hire boat steerer then for what ever reason revved the engine, which meant the boat moved sharply across the pound, dragging the lady and gentleman on the centre line towards the water. I shouted at them to drop the rope, but it was to late the gentleman fell into the canal and disappeared under the water, he was hanging on to the rope and came up to the surface, hanging on to the rope meant he was then going to pull the lady in as well, so once again I shouted at him to let go of the rope, which he did. I then told him to stand up as he was close the bank, he then pulled himself out of the water and laughed it off. Having made sure he was ok, I then suggested that he take a shower and if he felt unwell at all later on, he should seek medical help. That was the first ducking of the year I have witnessed. 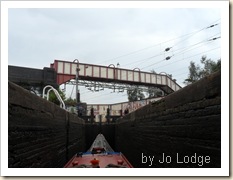 We continued on our way, with boats continuing to come up the locks, meaning the locks were in our favour. 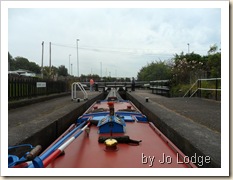 I met and chatted to some lovely people today, they included a young woman single handing on to the Macclesfield Canal, where she was renting her boat out for a couple of weeks. I worked the lock for her, so she did not have to climb out of the lock. 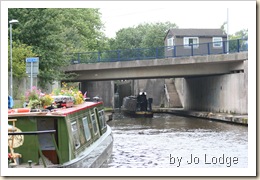 We cleared the Stoke Locks with boaters queuing to go up. 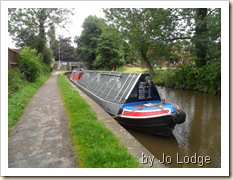 We briefly stopped at Hemheath bridge No.106 at Trentham, so I could buy a new hat from J&P Hats at Trentham Gardens. I had forgotten how far it was to walk and so was puffed out by the time I got there. 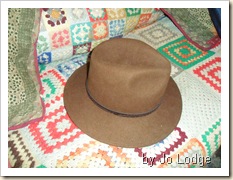 They did not have the hat I wanted, but I did buy one of a different style and I am very happy with it. When I got back to the boat, I was in need of a cold drink before we set off through Trentham Lock. 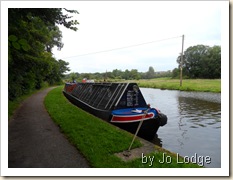 Having descended the lock, we carried on to the Wedgwood factory at Barlaston. We decided to moored up before the bridge this time, normally we can never get in here, so will make a nice change. We have a good TV signal, so the Olympics is now on and coffee has been made. I have really enjoyed today, it was lovely to meet so many wonderful people, who were out enjoying their boating.