Kings Bromley to Bridge No.81 near Whittington on the Coventry Canal. 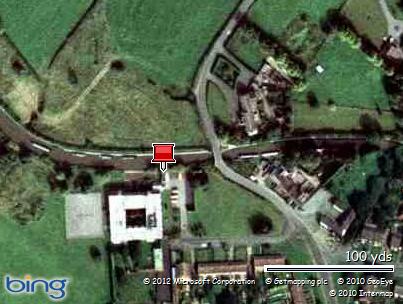 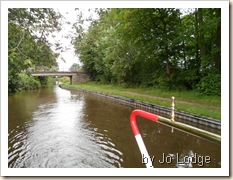 I had a wonderful nights sleep and was only woken by the sound of the wind in the trees and a Tawny Owl calling from not to far away. The only reply it got was from a Little Owl, who was probably calling its partner.

We left the Kings Bromley mooring at 8.15am. 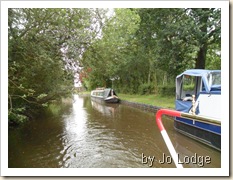 Moored in front of us was John and Margaret On NB Phoebe, who I mentioned in my posting yesterday. As we passed them by John stuck his head out of the side doors and said "hello". He and Margaret have been reading my blog for the past 3 or 4 years. As I have said in previous postings, it is always wonderful to meet people who take the time to sit and read mine and other peoples blogs. When I started writing my blog, I never expected people to actually read it and find it interesting, let alone send me comments, so I do feel quite humble when I meet people who take the time to come by and read my ramblings. Hopefully I will meet John and Margaret again and we can have a chat over a cuppa. 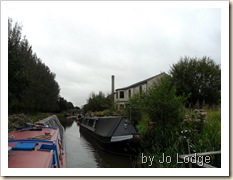 We waved goodbye to John and headed on past Bromley Wharf, the weather was beginning to turn and the rain began to fall. Donkey Jacket on and camera put away, we crept past the boats moored on the wharf. I always think the wharf house looks so sad and unloved as it has been empty for sometime. It is crying out for some TLC. The stretch to the locks is mainly woodland and fields, many of the fields are waiting to b e harvested, but as long as the weather stays unpredictable, the farmer is going to struggle to get his crops in. 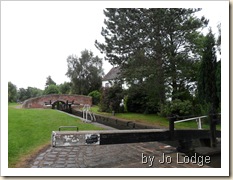 Approaching Wood End Lock, NB Capercaillie was ahead of us and were just entering the lock, so we pulled into the lock mooring and I stepped off the boat to help with the gates, which can be heavy and do tend to come open all on their own. The rain was heavy for a few minutes and it did tend to become the topic of conversation with everyone we met. As I have said before, I really do not mind the rain as long as I do not get cold as well.

We got to Shade House Lock and NB Capercaillie, was just about to enter the lock, so again we pulled in, I stepped off to help work the lock. With nothing coming up, I then set the lock for us, whilst NB Capercaillie did the Middle Lock. When it was our turn for the middle lock, it was set for us by a boat coming up. It was then onward to the junction. I walked on down to open the swing footbridge on the Coventry Canal. NB Capercaillie had pulled in for water and so as Keith swung the boat into the junction the gentleman very kindly closed the swing footbridge behind us, so that I could get on to the boat. The weather was beginning to brighten and although there was no sunshine, it was warm. 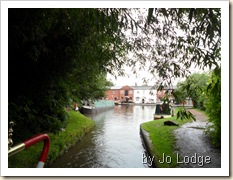 In front of us was NB Ella with Sally and Philip Bridger on board. We are Facebook friends and they came to see us last November when we were on the Ashby, at that time they were looking to buy a boat and continuously cruise like us, well they have fulfilled their dream because they now have Ella.

We were now the jam in a boat sandwich with NB Ella in front and NB Jampak behind us and this made for some fun and games at Bell Bridge no89. NB Ella had begun to enter the bridge 'ole when sudden they were in full reverse. 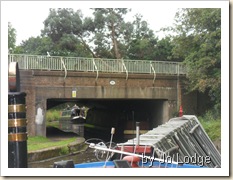 A hire boat had begun to try and come through from the other side, having realised they could not make it, they also reversed back to allow NB Ella, ourselves and NB Jampak through. We in turn left them high and dry on the mud unfortunately. The poles came out and eventually I saw them get on the move again.

Today was a day for meeting people, because at bridge 87 Bearshay Bridge, we met Brian on tug Kyle. 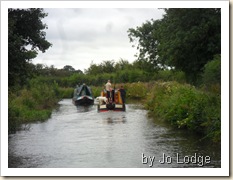 The last time we saw Brian was last year on the River Severn, so it was nice to see him in passing again, we said a quick "hello" and found out he is coming to Shackerstone, so we will see him again in a couple of weeks, 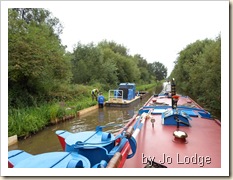 Before Streethay Wharf, a couple of Canal and River Trust workers were repairing the bank. 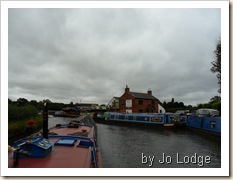 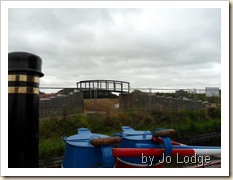 We past Huddlesford and decided to moor up near bridge 81 Cheadles Bridge. 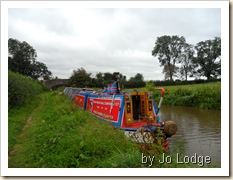 We could not get in properly on the south side of the bridge so Keith reversed back through the bridge 'ole and we found a deeper enough mooring to get into moored up and then I got on with cutting the grass with our shears. I like to see the gap between the bank and the boat when stepping off and with the grass so high I could not see a thing. I had made us spagetti on toast for lunch and we were just settling down to type our blogs when a boat came past the galley doors. It was NB Bog Woppit with Ruth, Chris and Owen on board, they pulled up in front of us to buy one of Keith's Rag Rugs for the boat. It was nice to put faces to names, because until now we had only known them through Facebook. We got to have a quick chat with them, before they had to be on their way as we were creating a traffic jam with boats coming in both directions.

It is now 2,20pm and the forecast rain has begun to fall again, boaters are coming past with wet weather gear on and umbrella's up. I am thankful we are moored up now and will be now for the weekend.