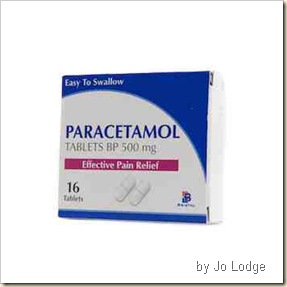 A few years a go, legislation was bought in so that shops and Pharmacies could only sell up to 32 Paracetamol tablets in one transaction, which is 2 boxes of 16, it was to cut deaths by overdosing and suicides. Now whilst it is possible to still go in to one shop and buy 32 Paracetamol and then go next door and buy another 32 tablets, shops like Superdrug, Boots etc will only sell 2 packs of 16 tablets at one time. Poundland were rapped over the knuckles back in 2009 for selling 48 tablets for £1 and the The Royal Pharmaceutical Society of Great Britain (RPSGB) were asking for a legal loophole to be closed to stop Poundland from selling 48 tablets in one go due to safety reasons. Well clearly they have not closed that loophole yet, because today whilst out shopping with a friend, I went into Poundland in Stafford and they had 3 packs of 16 Paracetamol tablets for £1. Both the Medicines and Healthcare products Regulatory Agency (MHRA) and Royal Pharmaceutical Society hit out at Poundland's three for £1 paracetamol deal over patient safety fears back in 2009 and yet nothing has been done.

I picked up two packs of the Paracetamol knowing the legislation and said to my friend that I did not think they could sell 3 packs, so I took the two I had bought to the till with my other items. The lady at the till told me "Oh these are on offer you can have 3 packs for £1". I did query it with her, but was told it was fine. Still feeling unsure, I went into Boots and asked the Pharmacist about the legislation and she was very concerned that I had been sold 3 packs, she told me that I would have only been sold 2 in Boots. Surely Poundland has a legal responsibility to stick to the law, even if they find a loophole. They obviously have no thought to peoples safety.

I have contacted the Medicines and Healthcare products Regulatory Agency (MHRA) and will see what they have to say. I find it disturbing.