Yesterday (Sunday) in many ways was a quiet day for me, I spent a lot of it watching the Olympics, I also painted a third coat of paint on the bathroom ceiling, so that is now all done. I screwed the bathroom cabinet back on the wall and put everything back in to it, discarding some items which had clearly seen better days. I do love a good clear out. At all times I had one ear on the TV listening to the Olympic results.
During the afternoon my friend T and I had agreed to meet at 2pm to go shopping, but at 1.45 pm there was a few huge claps of thunder and then the heavens opened with a deluge of rain, so we decided to stay put and kept texting each other on new times to meet. When the rain finally stopped, I went off shopping with my friend T to Stafford as I mentioned in yesterday's posting, whilst we were out doing a bit of retail therapy, Rob came over to say "Hello" to Keith. After spending a lovely couple of hours with T, it was back to the boat, to think about something for dinner. With the fridge looking very sparse, in the end I made us some Chilli Chicken and Rice, which was nice and for pudding we had some Pineapple.
The evening was spent watching the Olympics whilst listening to the thunder, which was overhead at one point and the noise was deafening. Paddy was not at all impressed with the thunder and kept coming to me for reassurance. I settled down to watch the Olymnpics and to see Usain Bolt did it again, by winning the 100 metres final, the man is a machine. We had yet more medals, with Andy Murray winning Gold at Wimbledon beating Federer and then taking Silver in the mixed doubles with Laura Robson, which in itself was amazing because they had not practiced together due to singles commitments and only found out they were playing together a week before, so what an achievement. More medals came in the gym with another Silver and Bronze medal, so another wonderful day for Team GB. 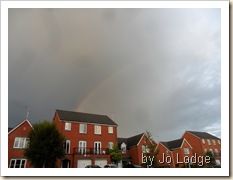 Bedtime came at 10.30 pm, my head hit the pillow and I was away.
Monday morning and after a sunny start the clouds began to gather. Paddy got his walk in watery sunshine, but he did get to meet a 7 month old spaniel puppy which was so very cute, they hit it off straight away. Back on the boat it was breakfast all round and the generator went on to charge the batteries at 9 am. We do not put it on to early when moored up with other boats and houses all around us, not because it is noisy because it is not, but out of respect for others around us. 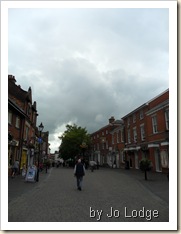 After the batteries were charged, we locked the boat up and walked round to Roger's boatyard to see if he had cut our new floor board for the back cabin, but he was out getting supplies, so we walked into Stone to trawl around the charity shops. We went into Home and Garden to see if we could find a better soap dish and as we walked down one of the aisles I noticed money on the floor, so picked it up. There was £25 in all, now I could have easily have put it in my pocket, but did the decent thing and handed it in to the lady on the till. Not long after handing it in an elderly lady claimed the money, having dropped it from her shopping bag. The lady on the till said to me " Thank you for being so honest". I said to her " I know no other way, it is just the way I am". We had a lovely wander around the town, seeing people we knew, whilst trawling around the many charity shops in Stone, I found a pair of curtains. 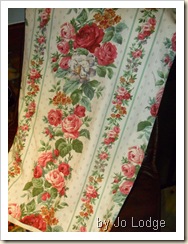 I have been searching for the past 5 years for the right pattern for the curtains in the back cabin and have never been 100% happy with the ones I have had in the past, but today I found what I have been searching for. The pair of curtains are 76" width and 86" Length, with tie backs and fully lined, they cost me £3.99 from Age UK. This means they are big enough to make a Summer and Winter pair of curtains. Whilst in Stafford the other day I saw some lovely material on the market but they woman wanted £5.99 a metre, which I was not prepared to pay. So I am really pleased to have found my material today, now I have to make the curtains.
On the way back to the boat we walked back to the boatyard and Roger was there, so he very kindly cut out our floor board which I have to paint and will do so over the next few days. We called on Nigel on his boat Enseabee and had a lovely coffee with him whilst chatting about our year. It was wonderful to hear all his news and points of view. We of course also managed to put the world to right.
Back on the boat, lunch was enjoyed whilst watching the Olympics and we have just seen Beth Tweddle win a Bronze Medal in Gynmnastics, so many congratulations to Beth who has been a huge ambassador for her sport.
The heavens have opened again, so it looks like we can expect some more showers this afternoon.
Posted by Jo Lodge at Monday, August 06, 2012