Yesterday late afternoon, it was time to unload the trolley, collect boxes and bags and head off up the towpath to await a Tesco food delivery. Mr Tesco man had text me to say he would be with me between 4.15 pm and 5.15 pm, so at 4 pm having got ready Keith and I strolled up the towpath and waited at the Whitebridge Industrial Estate for Mr Tesco man to arrive. At 4.30 pm my phone rang and it was James from Tesco letting me know he was on his way. By 4.40 pm he had found us waiting for him. The loading of the boxes and bags is always an easy job as we have done it so many times. James had never delivered to boaters before, so it was a first for him.

Back on the boat, Keith passed the boxes and bags to me through the galley window, I then had the tiresome job of stowing the shopping away, whilst trying to cook dinner at the same time. Just as well women can multi task. Shopping stowed away, dinner on the go and pets fed, I had a few moments to sit down and take a breath. In the Olympics Beth Tweddle won Bronze in the Gymnastics and GB took a Gold in the show jumping, I was so pleased for Nick Skelton, who I once met at Hickstead, that man is a legend. It had been another good day for Team GB.

After dinner it was shower time and Olympics all evening, beofre heading off to bed at 10 pm. 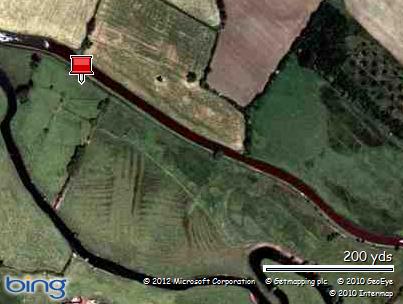 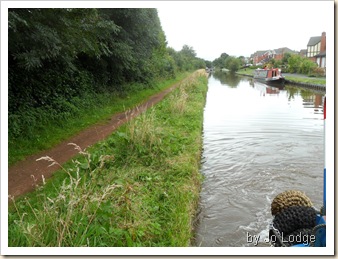 This morning we woke up to a bright start, but it did not last because when we left Stone at 8.35 am the heavens began to open. 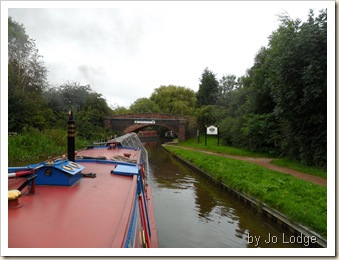 Straight away we met a boat in a bridge 'ole. 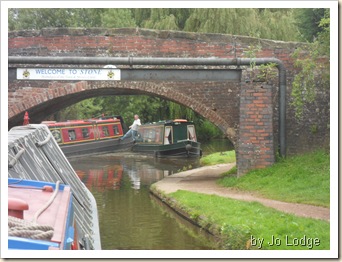 The bridge 'ole was probably ours, but with the other boater steering all over the place, Keith reversed and let him come through. 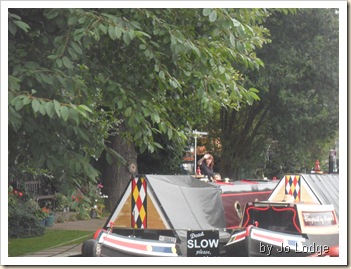 As we passed Tina and Rob they came out to wave to us and we said our goodbyes. It was wonderful to see them again, I always look forward to catching up with them both. Nigel also waved to us from Enseabee as the rain lashed it down and I was now wet through, but hey once your wet, your wet on the plus side it was warm. 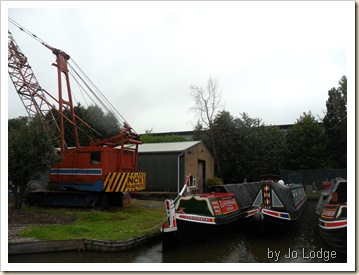 Passed Hadar's birthplace, but no one was around to wave at. 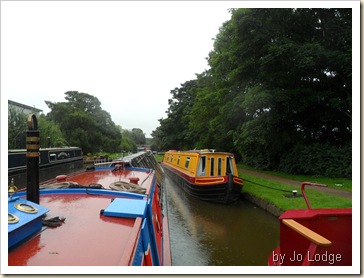 On the approach to Limekiln lock it was clear to see a Viking Afloat hire boat was moored on the lock mooring bollards, so to get off Keith pulled alongside and I stepped across their bow, just as I did so the hirers came back from getting milk and bread, so I spoke to the lady on the boat and suggested that they do not moor on lock moorings.

She said " I am sorry, we did not know. We have seen others doing it".

I said to her " If you have seen others doing it, then they should not. The lock bollards are for boats using the lock, so they can get in to work the lock".

I suggested they move further up the moorings, because whilst I am a nice person and happy to help with advice, not all boaters are the same and I did not want their holiday spoilt, by a lack of knowledge. As we entered the lock, they did untie and move even though it was pouring down. I hope they have a wonderful holiday. 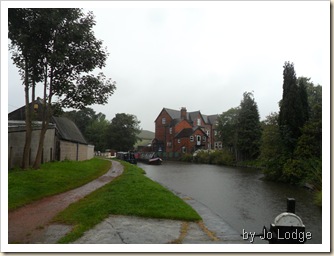 Onward to Newcastle Road Lock and I could feel the rain against my skin, which meant it had gone right through my clothes, but I pressed on. Keith asked if I wanted to change, but there seemed no point, after all as he tells people, our skin is waterproof, its our clothes which are not. Below Newcastle Road Lock, we emptied the toilet cassette and then headed to Star Lock, which was pretty much in our favour. All the moorings in Stone were full, which did not surprise me, they are always busy. At Aston Lock a boat was coming up, so I stepped off with the centre line to wait for the lock to clear. 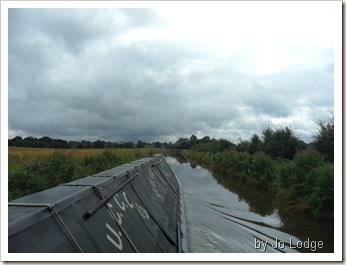 We were then off into open countryside and the rain finally stopped and the sky became brighter. 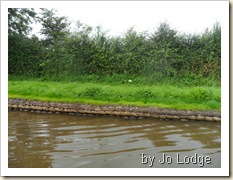 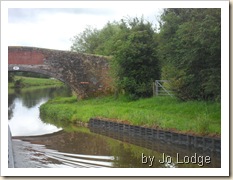 The land guys have been busy repairing the banks along this stretch of the Trent and Mersey, it would be nice now if the grass could be cut. 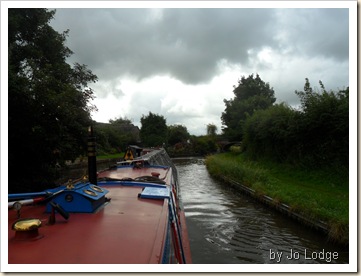 At bridge 86 Upper Burston Bridge, we spotted a boat coming through the bridge 'ole, so once again Keith reversed to allow him through. The Trent and Mersey is always busy and this morning was no exception. Again at bridge 85 Lower Burston Bridge, I just spotted a boat coming towards the bridge and this one was coming at speed. The bridge is on a bit of a bend and whilst we were approaching the bridge 'ole on tickover, they other boater was clearly going to fast, so then whilst trying to slow down almost hit the bridge on his way through. We had yet again reversed to let him through. He did thank us, but that was probably because he knew he was coming towards it way to fast. 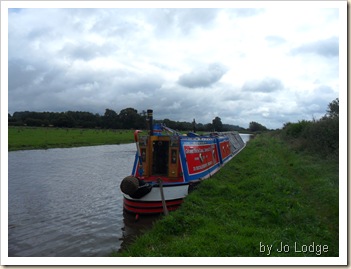 Just after bridge 85 one of our favourite moorings was empty, so we decided to pull in and moor up for the day to allow everyone else to go about their boating, so we are moored between Burston & Sandon on the T&M canal at 11.10 am. We have a TV signal and so having got all the boat jobs done, the TV has gone on for the Olympics. It is now time to make us some lnch and see what the rest of the day brings.