I did not have a particularly good nights sleep, maybe it was because I knew we wanted to be up at 5 am, so was listening out for the alarms, yes I have two alarms on, a battery one and my mobile phone alarm, so there is no way we will sleep in. During the early hours when I was lying wide awake, I was listening to a fox barking, not far from the boat. They always sound so haunting.
5 am the alarms went off and we were up and about our boat duties. I opened the back cabin doors to take Paddy for his walk and was greeted by a wall of thick fog. 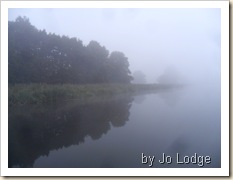 I could hardly see my hand in front of my face at times. On the forecast they said it would be misty, this was definitely fog. 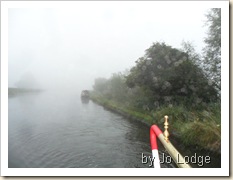 After breakfast, we got the boat ready for the off at 5.50 am and tried to leave as quietly as possible, we did say to the boat owners behind us that we would be leaving early and hoped we would not wake them, they reckoned we would not bother then, so fingers crossed this was the case.

Tixel Lock was ahead of us somewhere. 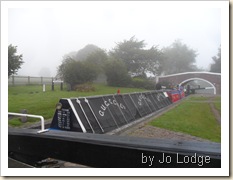 In the lock we kept the noise down to a minimum as there are now people living in the lock cottage.

By 6.40 am there were patches of blue sky beginning to appear. 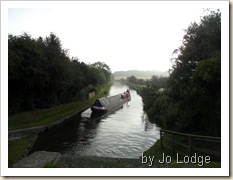 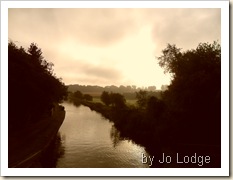 The view from Deptmore Lock in the early morning light.
By 7.15 am the sun was out and burning the fog away.
The locks up to and through Penkridge were in our favour as boats were on the move down through them, which was very handy. At Longford Lock a boat was coming out of the lock, they left the lock ready for us, on passing us we realised it was Lynne and Paul on NB Piston Broke, in passing we had a quick chat about plans etc, before wishing each other well. The moorings at Penkridge are normally full, but there were quite a few places available for a change, just typical that we were not stopping. The last three locks were not in our favour as we had a boat going up ahead of us and nothing coming down, but I had had a easy morning, so was none to bothered. 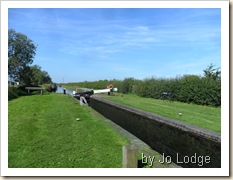 The grass cutting contractors were out in force with mowers and strimmers. 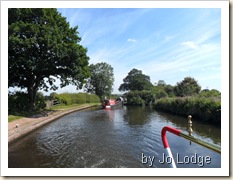 As we were coming up through Brick Kiln Lock, Glynn and Roe were waiting to go down on Historic Working Boat Aquarius. It was lovely to see them, we had a quick chat with Roe as I worked the lock, they were off to Shardlow for a rally. 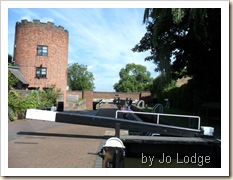 Last lock of the day was Gailey Lock and once again the moorings were quiet as was the sanitary station, so we stopped off to get rid of two bags of rubbish, which I did not want in the hold in this hot weather, because they would begin to smell. 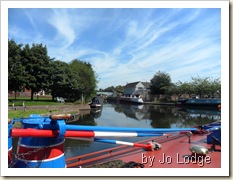 Rubbish binned we carried on past the Hatherton Branch and Marina. The sun was really hot now, so I was glad I had put my sun protection on. A couple of places we have moored at before were all full. 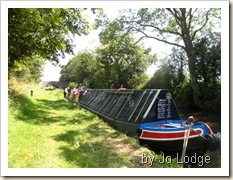 Just past Br 74, Keith spotted a mooring just big enough for one boat, so he pulled in to see if it was deep enough for us and it most certainly was. So we have a dappled shady spot all to ourselves, which is pleasing Marmite no end because no sooner we were moored up, she wanted to be out on her lead and in the grass. Paddy was straight out on the back counter soaking up the sun as it peeked through the trees. The TV is on and we have the Olympics on again. It is going to be a salad again tonight and an early night I think, because we want to be off early in the morning again, to get through the narrows before Autherley Junction.
Off now to put my feet up.
Posted by Jo Lodge at Thursday, August 09, 2012