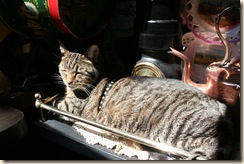 Yesterday when Marmite got fed up of the sunshine outside, she laid on the back cabin stove and lay in the sun inside. Not sure it was what she meant to do. As yesterday drew to a close, the birds were still singing gone 10pm and the bats were swooping over the boat, as they caught their evening meal of flies of which there were plenty.

Did you watch it?

I am talking about Soccer Aid from Old Trafford. England beat the rest of the world 3-1 in what was a fantastic match with lots of passion shown by the celebrities and professional players. The national team could learn something from that match after their match against Norway the other night. If  the national team had shown half the passion the Soccer Aid teams did, we would have beaten Norway by more than just 1-0. As was said by someone "No grass was set on fire". The England team against Norway need to show more passion if they are going to play for their country. Looking forward to the Soccer Aid match again in 2014, as it is only held every two years, but such a treat.

With only a short jaunt, we set off from the mooring we had sat on for a few days whilst painting the boat at 9.25am, having listened to other boats on the move very early. The sun was out and it was very hot even at 9.25am, so we were in for another scorcher of a day. We were fortunate not to meet any of the on coming boats at bridge 'oles.

This large Sycamore was stood very proud I thought.

In no time at all we were back at Ellesmere and moored up at the end of the 72 hour moorings, which was ideal for us to cross over to the sanitary station before we leave. No sooner we had moored up, Marmite and Paddy were out on the back counter greeting passers-by. As I sat drinking my coffee in the saloon, I could hear people walking past saying "awww look a pussy cat and a dog". I guess for some they do not realise you can have cats and dogs on boats. With it being so hot and getting hotter, I suggested lunch out and then a stroll around the Mere. Lunch out was a great idea, because with us not being in a shady spot, cooking on the boat would be extremely warm, so lunch out it was.

11.30am we locked up the boat and walked into Ellesmere, where the bunting is out for the Jubilee Celebrations on June 4th.

Even the shops are making the effort.

We planned to eat at the Red Lion, but it did not open until 12 noon, so we walked around the church yard of The Blessed Virgin Mary, which we had visited before. BLOG.

There were some interesting gargoyles around the church.

12.05pm we walked into the Red Lion and ordered some lunch and a couple of pints of Thwaites bitter.

I had the Prawn and Cod Fishcakes and Keith had the Steak and Ale Pie, for pudding I had the Eton Mess Cheesecake and Keith had the steamed Strawberry Pudding. I most certainly recommend the food, it is excellent value for money.

After such a wonderful lunch, we strolled down to the Mere, which look stunning in the sunshine.

The waterfowl were out and about with their young. We went into the visitor centre and watch the Herons on the TVs. In the middle of the Mere is Moscow Island which is a Heronry. After that we walked around the Mere.

The woodland area is a very quiet place.

We crossed the plank to Dead Man's Island and got chatting to the lovely couple in the photo who are camper van owners and have travelled all over the country and Europe. After going as far as we could, we strolled back through the wood and into the town, heading back to the boat, which was a tad on the warm side, but with the doors and windows open, was a nice breeze floating through. A lovely day and an excellent meal out, so all is good in my world.