Llangollen to Froncysyllte and beyond.

We left Llangollen at 6.55am, hoping to get through the sticking points before any other boat got underway.

I walked ahead at the narrows to make sure nothing was coming.

On arriving back at Trevor, I walked ahead to check the junction was clear, which thankfully it was, the only obstacle was a hire boat moored on the opposite bank of the junction, Keith did his best not to hit it, but did end up putting the bow up against the side of the boat to get Hadar round, it was not the best place to moor a boat, especially for those who misjudge the turn.

We then set off across the aqueduct. I walked ahead to wind up the lift bridge at Froncysyllte, which is where we are now moored up for the rest of the weekend. After getting a few things done on the boat, we went out with our friend Mike, who took us to see the sights around North Wales, we then had a fantastic lunch at Plas-yn-Dre Restaurant. 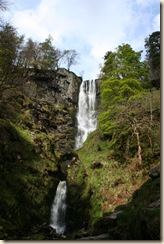 First of all we visited the Pistyll Rhaeadr waterfall. It is an enchanting waterfall in the Berwyn Mountains, just inside Wales, west of Oswestry and Shrewsbury. At 240ft (80m) high it is the UK tallest single drop waterfall. The word spectacular really does not do it justice.

Tan-y-Pistyll, meaning little house under the waterfall is a tea room and B/B accommodation is located close to the falls.

The views were amazing.

After that Mike took us to see Lake Vyrnwy, Llyn Efyrnwy. The lake is actually a reservoir for the City of Liverpool in the North West of England. It is so impressive.

During the late 19th Century it was decided by the powers that be that a reliable source of clean water was needed, so the land was bought for the lake. To ensure the water stayed pure for drinking they also purchased the surrounding 24,000 acres. This then enabled them to control the scenic beauty of the area and beautiful it is. Some of you may know that there used to be the small village of Llanwddyn on thie site in fact it was smack in the middle of what was to be the lake. The powers that be promised the villagers that they would relocate, and the new village would be on the land either side of the new Dam. Work on the dam began in 1881. On completion the lake was stocked in 1889 with Loch Leven Trout. To this day the fishing and other country sports continue, including canoeing, sailing and board sailing.

Mike also told us that there is a RSPB reserve. The RSPB nature reserve covers 16,000 acres with several bird hides around the lake. In the reserve you will find Red and Black Grouse, which Mike takes people to see. It is a sight that will take your breath away.

Our next destination was Llandderfel, where Mike and Jane lived for a while. He wanted to show us the church and the stone masons marks.

The church was not open so we did not get to see the inside which Mike said was lovely.

We went into Bala for lunch at the Plas-yn-Dre Restaurant in the High Street. Mike and Jane had had their wedding reception here some 18 years ago. The building was the former town mansion of the Llwydiad (Lloyds) of Plas Rhiwaedog. Before the opening of the restaurant in the 1990s, parts of the mansion were used as the local health centre. The X-ray machine at the centre, still going strong in the mid-1980s, was one which had been left behind by the Americans following WWII and was proudly hailed as the oldest operational x-ray machine in use in Britain. I wonder where it is now?

On the way home we called into Glyndyfrdwy railway station to watch the steam train some through on its way to Llangollen.

The Palatine 44806, is a magnificent machine, with a beating heart that sings to you as she gets underway.

Such a treat to see steam trains two days running.

As the train chuffed away into the distance, we got back in the car and made our way back to Froncysyllte, where I made us a coffee on the boat, before it was time to say a huge thank you to Mike for taking us out for the day. Our evening was spent in front of the TV watching "Britains's Got Talent" and then I was away to my bed. It had been a busy and long day, but also so very satisfying.