Canal Central back to Queen's Head.

Yesterday afternoon, having thought that I would be doing very little, I suggested to K that we should go out and have a walk as it was so nice, so at 2pm we closed the boat up and headed off along the towpath towards Maesbury Marsh, we got up on to the road and walked through the village to the Navigation Inn and back down on to the towpath. We did not walk far, but it was nice to stretch the legs and on the way back we had a coffee at Canal Central. Back on the boat it was a matter of cooking dinner, feeding mog and dog, during the evening we sat and watched "Planet Earth Live", wow what a powerful program last night, with the Elephants almost loosing their babies in a swollen river, thankfully further down the river they managed to climb out and were reunited with their mothers, but it could have been such a huge disaster. We then watched "Lost Families" before heading off to bed.

We left our mooring at 8.45am and were waved off by the owners of Canal Central. Following behind us was a hire boat.

First stop was the sanitary station at Maesbury Marsh, as we needed to top up with water and more importantly empty the toilet cassette. The station is very clean and well looked after, the only down side is there is no bins to put rubbish in, so we will do that further up. The hire boat came past us whilst I was filling the water tank and moored up opposite the Navigation Pub, the people then went in search of the farm shop. We said goodbye to Maesbury Marsh, leaving the hire boat behind.

It was hello to the bottom of the three Aston Locks. The Swallows were still darting in and out from underneath the lock keepers hut, but the Swans and their Cygnets were no where to be seen, so they had either moved or were well hidden in the reeds on the lake.

The water level on the pound above the lock was well down, so I suggested to K that I walk on to the next lock, just in case he should get well and truly stuck and I would need to let some water down for him to move. The hire boat had caught us up and my worry was they would fill the lock, draining yet more water from the pound. As he made slow progress to lock 2, he did stick in a couple of places, but managed to get the boat moving again without me having to let water down. The same thing happened above lock two as the pound was down and I had the same worry with the hire boat behind us. Lock 1 was full, so I emptied the lock into the pound making K's life a little easier. As the boat was coming up in the lock, a boat came along ready to go down, so I enquired if there were any moorings at Queen's Head and was told we could get in on the bollards in front of the canoe centre. 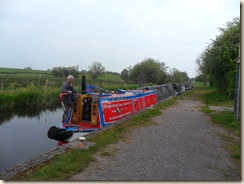 When we arrived back at Queen's Head, we found ourselves mooring in the same place as we had done on the way down. We are staying here for the weekend as we are meeting up with friends. It is almost lunchtime so I need to shut the computer down and get something made for lunch. I will wish you all a very happy weekend.