There was no hurry to be on the move as we were not going far. It was nice to see the sun shining when I got up, because most of the night the rain had been thumping down and even when I woke up in the early hours it was still lashing it down. We set off from our mooring at 9.25am, with a couple of boats ahead of us.

Cruising through a wooded cutting is always peaceful and pretty, especially when the sun is shining.

We arrived at Whitehouse Tunnel, to find there was nothing coming through from the other side, so we carried on through the tunnel.

By the time we reached the other end a hire boat was waiting to come in to the tunnel, there was no one behind us so it was all clear for them to precede.

It was onward past Chirk Marina, where the hire boats were being worked on and one of the boats in front of us had pulled in to, probably for diesel or gas, you cannot get a pump out or water there. 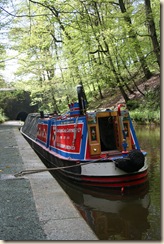 We arrived at the mouth of Chirk Tunnel and moored up, well when I say moored up, I mean we tried. I got the bow in but there was no way Keith was going to get the stern in, so Paddy was going to have to make a leap of faith for his evening walk, but that situation did change.

There is a information board telling you all about Chirk and what it has to offer, just a shame someone felt the need to spray paint all over it.

Whilst I was stood on the back counter a man on a tricycle came down the towpath, I then realised I was being Googled. it seems they are now googling the towpaths, so look out for us on the map at Chirk ;0).

After lunch, we set off into Chirk to have a look around and to pick up a few bits from the Spar shop. On our way up from the canal, we saw the google machine being loaded on to a trailer. British Waterways would be transporting them to their next destination.

Chirk It is situated between Wrexham and Oswestry. Chirk has a castle, which we visited 6 years ago, so did not feel the need to do it again.

Chirk was formerly a coal mining community with coal being worked since the 17th century. The largest of these collieries were Black Park (one of the oldest in the north of Wales) and Brynkinallt, both of these mines are now closed. There was an open cast mine opened in 1980's, but this mine is no longer in use either. Like most of the coal mines in this country they are no longer needed.

As always on any visit to a village or town, we paid a visit to the local church. The Parish Church of St Mary's is a Grade I listed building and very pretty. Inside the church two families stand out. The Trevor family of Brynkinallt and the Myddleton are everywhere inside the church. The Myddleton family purchased Chirk Castle in 1595.

Another family which made its mark in Chirk was the Edwards family.

Outside in the church yard we saw our first mausoleum.

Inside I saw this stunning statue.

The angel statue contains the vault of 5 year old Moyra. It is so beautiful and clearly loved, because there were fresh flowers on the vault.

When looking at head stones, it is nice to see information about the persons death on the stone, in this case Edmund Plunkett died in an accident at the Black Park Colliery, I have discovered that he was the manager at the colliery. He was in charge of 410 men under ground and 50 above ground. So sad that he was killed whilst working, but in those days it was a hazardous job.

Another name associated with the Black Park Colliery was James Darlington. He was a general manager and played James an active role in developing the town through the provision of community recreation facilities and improved living conditions for the miners. See it is amazing what you can find out from a church yard and the internet.

On the way back to the boat we passed the Ambulance station and Cadbury's Factory.

We crossed over the railway.

It was back to the boat.

Dinner is now cooking in the back cabin stove and mog and dog have been fed. I have no TV signal, so no "Britain's Got Talent" for me tonight, oh well the DVD collection will get a bashing instead. Tomorrow heavy rain is forecast again, so not sure what the plan is, so watch this space.