Having moored up on Friday, we did not venture far from the boat, as I wanted to get a few things done on the boat and then in no time at all it was dinner time. I made us Prawn and Mushroom Thai Green Curry with special fried rice, using the remaining Wild Garlic leaves. After dinner the TV went on for the rest of the evening and I vegged out until bedtime. I did worry that with the noise from the road, sleeping maybe difficult.

I need not have worried about the road noise, because I slept like a log. The road noise is loud, so if you want peace and quiet it is maybe not the place to moor. The problem with the Montgomery is there are not many places to moor.

We were wake at 6am, so Keith got up and made us a cup of tea, whilst I lounged in bed. The bedroom TV went on and we caught up on the news, a lot of it very depressing and in the case of the phone hacking at the News of the World very boring. I think when this enquiry is finally over we can all complain at the amount of money this has cost the dear old tax payer, because it must be costing us a fortune. Time to get up and face the day, with a brisk walk along the towpath with Paddy, then breakfast back on the boat, before getting on with the days chores. First on the list was to soak my work shirts, which needed a bit of vanish action. Second job was, I cooked up some mince, onions and carrots will be part of a cottage pie for dinner later. I then swept up Paddy's dog hairs, of which there were many. Alongside us is a canoe club and as I got on with job, canoes were beginning to surround the boat. It was a joy to see youngsters enjoying themselves on the water.

After a coffee Keith and I set off along the towpath towards Aston Locks, to have a look around the nature reserves. 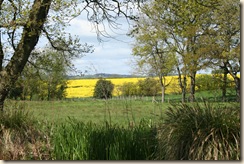 The sun was shining on a field of oil seed rape. We carried on walking down to lock three, where a pair of Swans we looking after seven Cygnets. This is my first sighting of Cygnets so far in 2012 and I still went awwww. I never get tired of seeing such wonders. 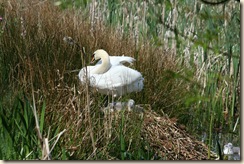 We decided that because the nest was close to the path, we would leave them in peace and give this nature reserve a miss and head back to the smaller reserve at lock 1. 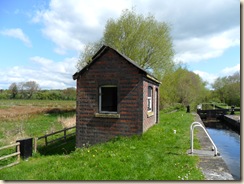 At the third lock there is a lock keepers hut, which has an owl box inside, but nothing was at home. 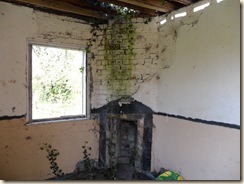 It would be nice to think this will be restored eventually.

We made our way back towards lock one. In between lock one and two there is a lovely cottage which had some geese outside, who clearly like to make themselves known. 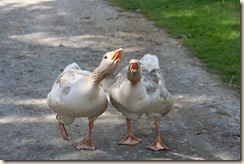 One of the took a liking to my trouser leg. They say geese are better than any guard dog, these two clearly wanted the job. Back at lock one, we walked across the lock beam and into a very nice nature reserve between the canal and a gold course. 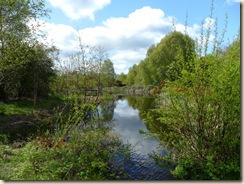 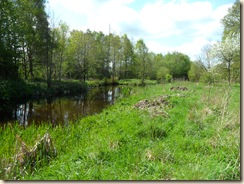 It is a very tranquil place to sit and listen to the bird song and to soak up the morning sunshine. On our way out of the reserve, we stood and watched four young Squirrels playing around the trunk of an old Oak tree, they were playing a wonderful game.

At lock one there are a couple of information boards, telling the story of the Montgomery Canal. 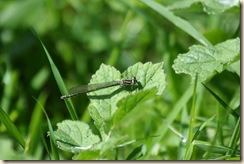 With the sunshine came the wildlife, the Mayflies are emerging from their winter slumber.

Back on the boat, I made us some lunch and we settled down for the F1 GP qualifying from Spain.