Queen's Head to the Weston Branch on the Montgomery Canal.

I had no need to hurry around this morning, because we were not going far, so I had a lie in with a cup of tea, watched a bit of the news, following the Olympic flame as it makes its way around the country over the next 70 days. I was up at 9am to walk Paddy, whilst Keith got on with making us both some breakfast. I only had toast, as I was still full from two cooked meals yesterday, Keith had poached eggs on toast, I am sure he has hollow legs.

We left the mooring at 10.25am having relit the back cabin stove.

On our way to the Graham Palmer lock a boat was coming towards us and I immediately recognised the lady steering. Her name is Brenda and the boat is named Solitude.

I do not know Brenda personally, but Brenda appeared on "Deal or no Deal" a few weeks ago, wearing her lucky hat. It was on that program I learnt that Noel had been on a few narrow boat holidays and knew a lot about the history, he in fact seemed to know a lot more than Brenda did. Maybe I will get to have a chat to Brenda sometime and find out how she enjoyed being on the show.

At the Graham Palmer lock a British Waterways man was clearing the weed from the lock gates, I had a quick chat with him as I worked the lock.

After an hour and ten minutes we made reached the Weston Branch, where we moored up on the offside. After some lunch we had a quick walk to the end of the branch, where it is supposed to be a nature reserve, but it in fact goes no further, so that was the shortest walk we have ever had. Both Keith and I decided that we should take the opportunity of a quiet mooring to saw up our wood with our new electric chainsaw. 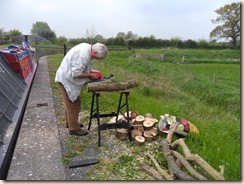 I climbed in the hold and threw some of the mountain of wood out on to the mooring, whilst Keith started up the generator and prepared the chainsaw, he then began sawing the wood. 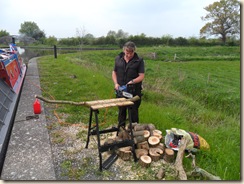 It was then my turn to have a go, after all no point buying an electric chainsaw so I can use it and then I do not at least have a go. Keith explained the workings and off I went sawing through the wood as if it were a knife through butter. We have a petrol chainsaw, but I find it to difficult to get it started. I am chuffed to bits with the new one and will be happily sawing wood when we find some more. on this occasion we managed to fill nine empty coal sacks with wood, so that is a great start to our wood collection for this coming winter. The bags of wood were stacked in the hold and the chainsaw stowed away.

The time is now 4.15pm and we are sat down eating Bombay Mix and watching the TV. Tomorrow we will be leaving the Montgomery Canal, which will be such a shame, because we have thoroughly enjoyed our time on it, but hey ho we will be back again, that I am sure of.