Whitchurch back to Marbury. 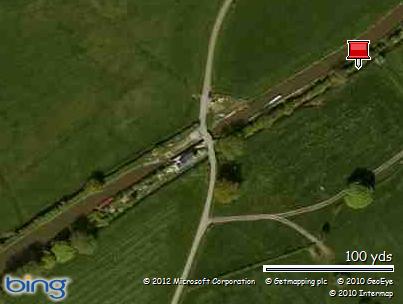 Yesterday after dinner, I felt the need to clean the brass which was looking a little tarnished, so there I was sweating my eyeballs out on getting it all nice and clean only for this to happen. 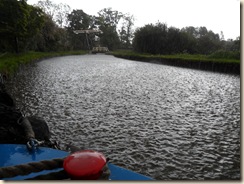 Yes within 15 minutes of me finishing the brass the heavens opened, the water looked like it was jumping because the rain drops were huge. It has to be said that it did freshen the air somewhat, but now I have to clean the brass all over again.

This morning it was still raining slightly as I took Paddy for his morning stroll a long the towpath, he was very unimpressed at having to get damp, whereas I was happily strolling along without a jacket on. 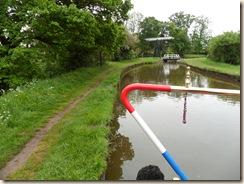 We left our over night mooring at 8.15, with a view to getting to Grindley Brook, assess the situation at the locks, if there was a huge queue we would have just moored up for the day and gone down tomorrow. 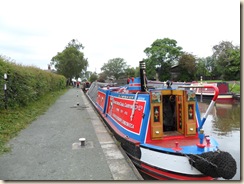 We arrived at the Grindley Brooks flight at 8.40 to find only a hire boat waiting to go down, so whilst Keith went off to empty our toilet cassette, he also checked in with the lock keeper and was told that we could follow the hire boat down. We waited for a boat to come up the staircase and for the hire boat to go down the first of the staircase locks, we then entered the top lock at 9am, so no long queue to worry about.

We cleared the staircase locks and I walked down to the next  lock, where I found the hirers struggling with the paddles. The couple from Australia were on their way back to the hire company after enjoying their holiday, unfortunately the lady was not feeling very well and was struggling with the locks, so I helped her out with the paddles and gates. Her husband said they had enjoyed their holiday, but had not found it very relaxing and so they would not do it again. I suggested that if they did ever consider having another canal holiday, they may like to consider a hotel boat, that way they could sit back and actually enjoy their holiday and only help work the locks if they wanted to, this seemed to appeal to them both, as they did not know about the hotel boats.

Keith rounded the bend to the lock as I got the hire boat underway to the next lock. We followed them down the flight with me helping them with the locks of which they were very grateful, especially as the rain was getting heavier.

We did not see many boats on the move, but one of the ones we did see made me giggle. I noticed that there was an umbrella up, but it was not until they had gone past that I saw it was actually a garden parasol with its cast iron stand. The woman was steering the boat under this huge umbrella, I wonder how she got under the lower bridges with that up?

By the time we reached Willeymoor lock, we were joined by NB Katrina. The gentleman onboard was very helpful, he was happy closing the gates behind us, so that we could get on to the next lock.

As we approached Marbury Lock, it looked like we had joined a long queue, but the two middle boats were moored up, we were in fact behind the hire boat again. Everyone helped everyone else make short work of the job in hand.

Marbury lock cottage is up for sale. This one is with Savills and can be yours for £345,000. I do think 3 bathrooms is a bit much though, after all there are only 3 bedrooms. Having exited the lock we moored up below the lock, well away from the lock moorings. We plan to stay here for the next couple of days at least, what with the Jubilee weekend coming up, we wanted a quiet place to stay.