Yet more painting and watching boats.

Last night we were treated to a nice sunset around 9.30pm. There I was stood outside in the cool to get a snap of the sun going down after another very sunny and hot day.

Having slept like and baby overnight, this morning the sun was up early and so was the heat, however Keith and I did not get up till 8am, but some boats were on the move just after 6.30am. Up and about, I was off the boat with Paddy for his walk along the towpath. Because it is so quiet where we are, Paddy has enjoyed a good run along the towpath every morning.

Back at the boat, mog and dog got their breakfast and then I then had mine. It was then time to get on with the days preparation for more painting. Today I wanted to repair some of the scumbling on the back cabin doors, which have been needing a attention for a couple of years, but I have never got round to it and I was a little bit worried about scumbling, as it is a bit of an art. Firstly I got the sander out and sanded down the areas affected. I prepared the first coat, which went on without a hitch and that was left to dry. Whilst that dried I then turned my attention to the front locker hatch, which needed a final coat of red gloss to the hatch hinges.

The hatch is now finished and looks good for the Summer. I did a few other paint jobs during the morning, to put the finishing touches to jobs I had started. 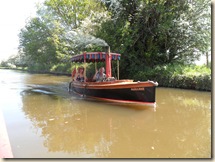 Just before lunch steam boat Mariamne came past and on such a beautiful day it seemed like the perfect way to cruise along the canal, later in the day they came back past us.

After a mushroom and spam omelette for lunch, I was able to put the second coat on the scrumbling, as I do not have a proper scumbling comb, I had to improvise somewhat, I used an old hair comb, which did the job. Now I know that those who do scumbling professionally will be winching at my attempt, but I was pretty chuffed with my first attempt. I went on to do the other door and then left them to dry. When I sanded the doors first thing in the morning, I also sanded sown the back cabin step, so that I could give it a teak oil treatment, which helps to protect the wood.

With all the painting jobs done, I then got on with ironing the back cabin curtains, which I had washed a couple of days before, they were then re-hung, and so the back cabin is now complete again. 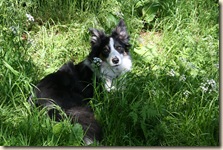 Whilst I got on with jobs, Paddy enjoyed laying in the grass. 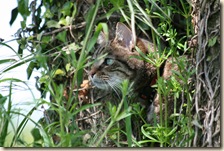 Marmite spent her time climbing between the trees and lying in the grass snoozing.

The afternoon is now turning into the evening and the rush of boats passing us by, has stopped so all is now quiet for an evening in front of the TV, before another good nights sleep.