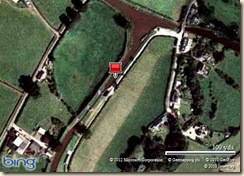 After a good nights sleep, I was awake early listening to a Peacock at a local farm. Peacocks are not something we hear very often along the canal.
8am I got up and made a cup of tea, which we drank in bed whilst watching TV. There was no hurry to do anything today, because we would not be going down the Montgomery Canal until 12 noon.
9am I was up, dressed and off along the towpath with Paddy for his morning stroll. When we got back to the boat, Keith suggested we move the boat on to the Montgomery lock moorings, so that we would be ready to go down, so we untied and moved the incredible distance of at least 100 yards from the 48 hour moorings out on the Llangollen canal, through bridge 70/1W and moored up again, above Frankton locks, ready for then the lock keeper arrived. With the sun out, it showed up just how tarnished the brasses were, so I got on with the job of cleaning them, whilst Keith was on his laptop. Now the problem with cleaning the brasses is, it inevitably makes it rain and yep that is exactly what happened. Keith had just started cleaning the tiller, when spots of rain could be seen on the surface of the water. It absolutely chucked it down for a few seconds, then the sun was out again, just like April showers, except this is May ;0).
11.40am the British Waterways lock keeper arrived and said "Good Morning", he then began to set the staircase locks.
11.50am we were told we could set off. I walked to the lock to do the paddles and as I did so, Keith tried getting off the mooring which was shallow. The British Waterways man was very friendly and gave us some local information which would come in handy no doubt. I always think it costs nothing to be friendly and say a good word and the British Waterways man was both friendly and had a good word, so a great start to my day. 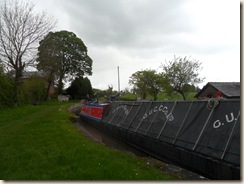 Having got off the mud, we made it down the staircase locks in the dry. 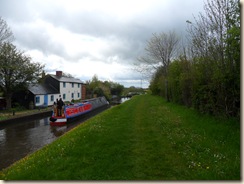 At the 3rd of the Frankton Locks there is a very pretty cottage, which has its very own outdoor model railway. 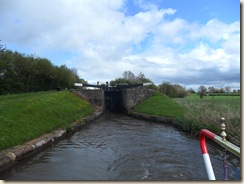 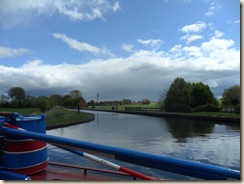 We reversed into the arm, took on water, emptied the toilet cassette and got rid of rubbish. Just as we stopped the heavens opened again, but I got on with connecting the hosepipe, whilst Keith emptied the cassette. With the water tank filling I then got rid of rubbish, the sun then came out again. 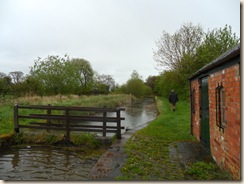 On our way back we will stop and walk up the disused part which is now a nature reserve. 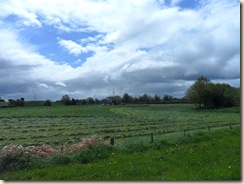 Alongside the arm a farmer was cutting his grass for hay whilst the sun was shining. 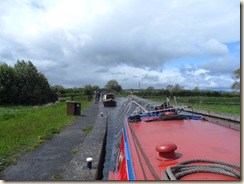 All done we were on our way again. 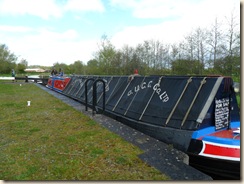 At Graham Palmer lock we met a boat coming up, but as the lock was in our favour we went in first. 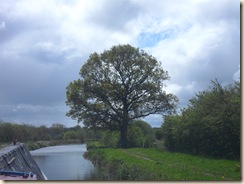 Not far after the lock, we passed this Oak tree. Once past this tree we were into new territory, when we walked down a couple of weeks ago, the tree was as far as we got. So we were now into pastures new. 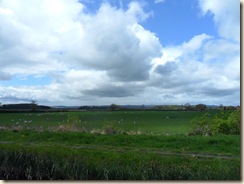 There are some fabulous views across the countryside as we approached Perry Aqueduct. 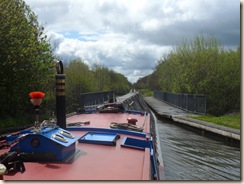 During February 1936, there was a 40 yeard breach in the canal north of the aqueduct, this was a major reason why the canal closed in 1944. 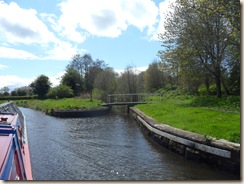 We the past the Rednal Basin, which you cannot go into. 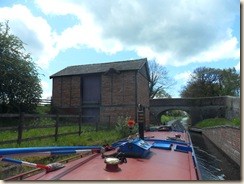 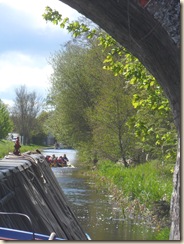 As we approached Queen's head, we noticed there were canoes in front of us and they were clearly struggling with the cross wind which was getting up. 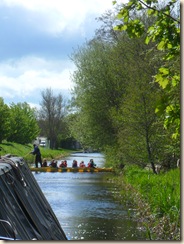 In the end the adult had to resort to pushing the boats off with his oar. 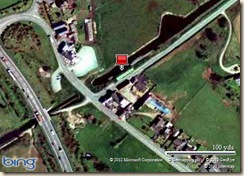 Travelled 3.85 miles, worked 5 locks in a time of 2 hours 30 minutes.
We arrived at Queen's Head and moored up on the bollards. 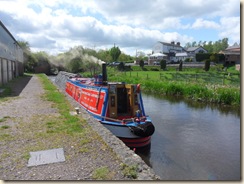 The children on the canoes pulled in behind us and I heard one of them tell his friend on the bank. "We were stuck and I saw this big boat coming towards us arghhhhhhhhh". I think he will live off the tale for a while.
Having moored up at 2.15pm a late lunch was had, fire stoked and thought were turning to dinner. Queen's Head will be our mooring for a couple of days, as we hope to meet friends over the weekend.
Posted by Jo Lodge at Friday, May 11, 2012