An early start from our overnight mooring. We were up at 6am, but in fact both Keith and I were awake before the alarm went off, I have a habit of waking before the alarm goes off. Breakfast eaten, Paddy walked and fire stoked, the boat was ready for the off across the Pontcysllte Aqueduct. We left the mooring at 6.45am with another boat ahead of us.

The boat ahead was to wind at the other end.

Keith took the boat half way across, so I could take photographs, then I took over at the tiller to the other end. 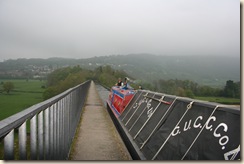 It was very exciting to be able to take Hadar over the Aqueduct, I have to admit I was a bit like a child, especially when I took over at the tiller. Not that I had to do anything, because the boat is in a trough and so going no where but straight. It was just the thought that I had the opportunity to steer.

We arrived at the north end of the aqueduct at 7am and made the 90 degree turn, on to the Llangollen Canal. We had the canal to ourselves and were in awe of the scenery even in the low cloud. In places the mountains did peek out from the cloud.

The canal is narrow in places and feels very closed in with the woods along side, but it is very beautiful.

I am so pleased to have come up here with Hadar. So many people told us we would never get her up on to the Llangollen, but apart from a couple of sticking points we had no problems at all with the depth of water. So for anyone drawing 2".6' you can get up to Llangollen.

The first of the narrows comes after bridge 41 Sun Trevor Bridge, so I stepped off the boat and walked the 300 metres to make sure nothing was coming in the opposite direct. The coast was clear so I rang Keith to let him know to come ahead.

There is only one lift bridge and it was open, just after the lift bridge No 44 there was another narrow part of the canal, this time 500 metres, so I once again walked ahead to make sure it was clear, just as I got to the end, an Anglo Welsh hire boat was about to set off, but saw me walking up the towpath, so held back.

On chatting to the lady on the hire boat, it turned out they were from Stone, Staffordshire, where our boat was built by Roger Fuller. We arrived in Llangollen, winded in the basin at 9.20 and headed back out on to the towpath moorings, where we moored up at 9.35am 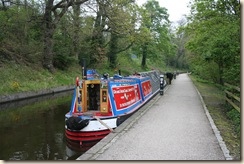 Both Keith and I are so looking forward to exploring Llangollen, because the last time we were here 6 years ago, we did not have the time.