Llangollen what a treat.

Having moored up, we spoke to Dave the British Waterways man and handed over our £12 for our 48 hour mooring with water and electricity (such a treat). We had hoped to stay for a little longer, but Dave told us that it was strictly 48 hours only, which was fine, we will have to come back again, which will not be a chore.

We walked back up the towpath past the house which looks like a castle.

We then got our first view of Llangollen, which situated on the River Dee and on the edge of the Berwyn mountains. 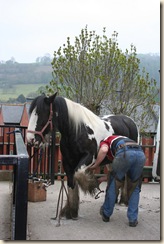 One of the horses which pulls the trip boat was getting some new shoes. 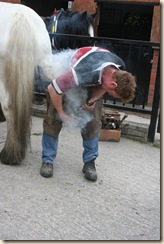 I remember the smell well from my horse riding days in my teens. The horses were being kitted out with their harnesses ready for a day of towing the trip boat.

The Llangollen Heritage Railway Station runs along side the River Dee.

The River Dee in all its glory. 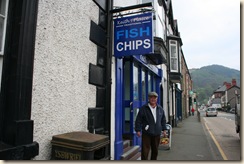 Lunch was had at Keith's Plaice. My Keith actually used to buy his Fish and Chips from here many years ago, when travelled through Llangollen on his way back from climbing. We took our Haddock and Chips down to the Riverside Park, where we sat at a table and enjoyed our meal.

From our table we could see The Royal Hotel across the river. Famous former guests at the Royal Hotel include the young Queen Victoria and her mother, the Duchess of Kent.

There are some lovely buildings in the town, which all have a vast history. We decided to go back to the railway station to have a coffee, but at £1.75 a cup we thought better of it and instead went on the train, which cost us £12 each for the Seven and a half mile trip to Carrog.

We were treated to a wonderful trip on the unique Wickham railcar.

We sat behind the driver, so had a lovely view.

The views of the Welsh mountains and the River Dee were subtime.

We arrived at Carrog after three quarters of an hour later to again some fantastic scenery.

The trip is well worth it, because you get to see the countryside and all it has to offer.

This is the Wales I remember.

On our return trip, we saw The Chain Bridge Hotel. It is named after the chain bridge which spans the Rover Dee, sadly the bridge has a notice on it saying "Dangerous possibility of collapsing". It is a shame that it cannot be restored.

When we got back to Llangollen, we went and had a pint in The Corn Mill and sat outside on the decking which is built directly over the mill race and the rapids. The mill was founded by the Cistercian monks of Valle Crucis Abbey. The building as it now stands was re-built in 1786 with three pairs of grinding stones, and continued as a working mill up until 1974. The mill then fell into disrepair, until its new owners got hold of it and turned it into the building it is now. it finally re-opened the building in June 2000.

The water wheel was working.

The views of the river was amazing. The river has Salmon and Trout. if your really lucky you may see an Otter.

We then walked up towards the park.

The crazy golf course did not look very crazy.

There was no windmill, or animals head where you have to get the ball into the mouth, it was all a little flat. 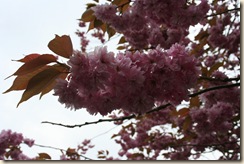 But the Cherry Blossom looked pretty.

On seeing the notice in this photograph, Keith said "I had better start sinning then, if I am going to be saved".

Llangollen is well worth a visit, I found it really beautiful with some great shops and places to eat. Yes it is touristy, but that is how the town survives, but if you look past that it is wonderful.

Tomorrow we are off walking.