A day in Oswestry.

No boating for me today, I was off to Oswestry with Keith for the day. There had been heavy rain forecast, so we thought we would stay put, but go to town instead. We caught the 9.50am Number 2 bus from Chirk Village and took a sedate trip to the bus station in Oswestry. From the records the area has long been settled. Old Oswestry is the site of a large Iron Age hill fort with evidence of occupation dating back to the 550s BC. We did not venture to the hill fort this time.

Instead we went to the old railways station to see if we could find any information about places in the town to visit and came away with a booklet, which was pretty comprehensive.

I loved the sheep outside of the old presbyterian church dating from 1888. It is now a shop for furniture, but there is a for sale sign outside, so it looks like it will be closed soon.

It was market day or the indoor and outdoor stalls.

There were some very useful stalls at both markets and well worth the visit.

The red brick house to the left of this photograph was where Sir Henry Walford Davies was born on the 6 September 1869. Henry was a British composer, who held the title Master of the King's Musick from 1934 until 1941. I have to be honest I had never heard of him. He took over the title Following the death of Sir Edward Elgar in 1934.

The Fox Inn is really rather cute, it looks like it has been squished into the space. It is one of the oldest half-timbered buildings in the town.

Entrance to Cae Glas Park. On the pillars are the names of all those who died in the 1st and 2nd world wars.

The flower beds in the seven acre park were beautiful.

Anyone for crazy golf? 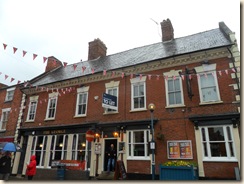 After walking around all morning, we were in need of some lunch and a pint, so went into The George, where we had two meals for £6.99 all washed down with a pint each of John Smiths. The pub is up for let, I am quite sure it will find someone to run it, as it is in a busy part of the town. Just before leaving the pub the heavens opened, so the forecasters had it right, rain would arrive. 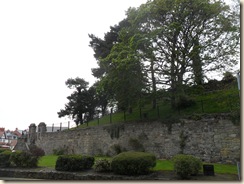 After lunch we walked up to the Castle Mound, the rain was only light, so did not bother us at all. The Castle Mound stands on a Glacial deposit, so giving you a fantastic view from every position. The castle was built just after the Norman Conquest in 1066, the parts we saw today though date from around 1135 and 1154, when Madoc ap Meredith built a stone motte and bailey castle. 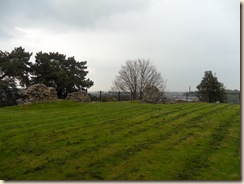 It would have been impressive in its day. 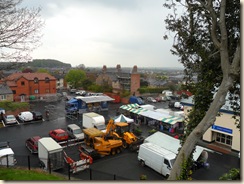 We had a good view of the outdoor market. The large blue wagon in the middle of the photograph was Wayne Walkers meat lorry, which was where we went next to buy some meat for the new freezer. We bought two joints of Lamb and ten Lamb chops for £20, which are now in the freezer. 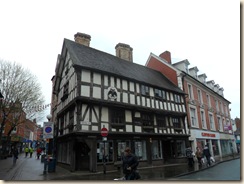 Having spent a great time in Oswestry, we made our way towards the bus station and spotted this fine looking timber building on the corner of cross street. Llwyds Mansion is one of the toens best known buildings and was thought to have been built for John Llwyd of Llanforda. On the side of the building can be seen the Llwyd family crest of the double-headed eagle and also the date 1604. It amazes me that buildings like this have survived so well over the years. I feel fortunate to be able to still see and admire the craftmanship of the builders. We made it to the bus station just in time for the bus. Having caught the No2 bus to Oswestry, we came back on the No2A bus and the driver was clearly in a hurry, as he was travelling at quite a lick along the country roads. It was actually a relief to be dropped off opposite The Hand Hotel in Chirk. 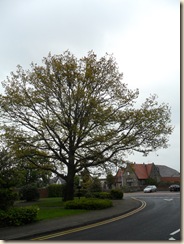 Walking back to the boat I noticed this Oak tree. it had a plaque on it telling us that The Royal Oak, was planted by King. George VI in 1937. I did not notice it when we walked up to Chirk. As we walked back along the road, I used one of our carrier bags to collect some wood chippings, I had had my eye on from yesterday. They will be great on the back cabin fire at night. Back on board the boat and the rain has set in, so we got back just in time. I have sausages cooking in the stove for hot dogs tonight and a DVD will be going on in a minute. The end to a perfect day.