Moreton Bridge no. 17W to Froncysyllte.

An early alarm call, 6am the alarm went off, but I was already awake and had been for a while. Thee was no sound of the rain we had yesterday still pounding on the roof of the boat and when I put my head out of the back cabin door, it was dry but rather gloomy.

By 6.50am we were ready for the off. The reasoning for getting up so early was we wanted to get over Chirk Aqueduct and through Chirk and Whitehouse Tunnel before the there was a rush of other boats. We past through the small village of Rhoswiel, which is on the Welsh Border. Just after Chirk Bank it was time to do the Chirk Aqueduct.

The low cloud was almost shrouding the aqueduct.

I stepped off the boat to take a few snaps of us cruising across the aqueduct, the only thing missing was a steam train in the back ground.

We were then back in Wales and heading through Chirk Tunnel (459 yards). The tunnel has a suspended towpath inside the tunnel, so there is only enough room for one boat at a time, despite what the notices say it is NOT two way tunnel. We crept our way through the tunnel, it was a little slow going. When we were up this way Six years ago, we went to Chirk Castle and popped into Chirk, so we would not be doing it again on the way up, we may go into Chirk on the way back. When we came out of the tunnel.

We were in wooded cutting with the railway viaduct alongside. I ducked into the cabin to make us a coffee.

We past by Chirk Marina, with many of the hire boats still in. We were then heading through Whitehouse tunnel (191 yards). The scenery is stunning as the Welsh Hills begin to take over and the River Dee kept us company below. The towpath all along this stretch has been redone, whether it is a recent job I do not know, but I am sure it was not like this Six years ago.

Having moored up, and done the usual boat jobs, I made us a packed lunch and a drink and we set off walking to Trevor

We had our first proper view of the Pontcysyllte Aqueduct and very fine it looked, with the morning brightening up. No one can fail to be amazed by this unique structure, which was built by Thomas Telford and was opened in 1805. It stands 126 feet above the River Dee and is 1007 feet long. It was estimated to have cost £47,018 back in 1805, cheap at half the price I think.

At the North end of the aqueduct, we walked up the short arm which was originally projected as a canal's main line towards Chester and the Mersey, but this never came off.

The arm leads you into Trevor and The Thomas Telford, which is behind the Anglo Welsh Hire Company.

We popped into the information Centre to see if we could get some information on the walks in the area, the two gentlemen working there were very helpful and gave us a couple of leaflets.g

We walked to the end of the arm, which is for visitor moorings, but I am not sure we would get in, it is however very pretty and quiet.

There are some great pieces of art work using bricks, which would have been made at the local brick works. Having walked around in Trevor, which does not have much to offer, there is the pub and a small shop if your need provisions.

We decided to carry on with our walk, down to a bridge we had seen from the aqueduct when we walked over it. From the bridge we saw a very pretty cottage, which we think may have had a water wheel many years ago.

Back across the narrow road bridge, Keith found a footpath, which would take us down along the River and under the aqueduct, so we followed it.

The footpath lead us over this mini waterfall, but then the pathway got very rugged, so we had to be careful where we put our feet, otherwise we would have ended up in the River Dee, which was flowing fast having been swollen by all the rain we have had.

We stopped and sat by the river to admire the Pontcysyllte Aqueduct. It is truly awesome.

Keith taking in the view.

Everywhere we walked there was the smell of Wild Garlic in the air. I am going to have to go out and collect some for some soup.

We eventually found the real route and footpath, which was well laid out and lead us to the Tŷ Mawr Country Park.

We walked into the Visitor Centre and had a coffee each was enjoyed with our packed lunch over looking the Cefn Viaduct.

In the country park they have a few animals.

This rather handsome Cockerel was making himself known. The walk then took us through a wood with lots of wood carvings of insects.

Having left the park, we followed the map.

We had to walk a long a main road, which spoilt the walk a little, but we did get some great views. 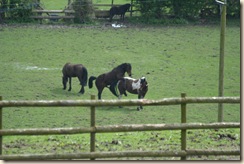 Which included this Stallion doing his thing. I think in a few months time, there maybe the clatter of tiny hooves. The sun was now out and both Keith and I were warming up nicely.

To our left we saw the new A483 road bridge which spans the River Dee.

To our right was the Cefn Viaduct and in the distance the hills of Garth and Castell Dinas Bran, which were looking glorious in the afternoon sunshine.

Eventually we found our way back on to the canal towpath and just as we made our way back to the boat, we saw a lady coming towards us, she asked "Are you Jo", to which I replied yes. It was Sue off of NB Beefur. Sue and Dave have a mooring near the Fron Lift Bridge just past where we are moored. We have said hello to Sue and Dave on passing when we have been on other parts of the system, and comment on our blogs, but we finally had a chance to chat properly. It was lovely to meet Sue and I am quite sure we will see both her and hopefully Dave again. 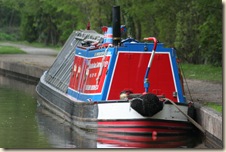 Since getting back to the boat, I have made the back cabin stove up, which was still going nicely, I have sat down with a can of Cream Soda, a Whisper Bar and the TV on, I know it cannot last because I have dinner to cook, animals to feed and a husband to wait on. Keith worked it out that in all we had done 5.63 miles, so I feel that I deserve a rest now.