Oh wow what a day I have had. It all began before 6am, when I woke up way to early. That is the problem with having a couple of early starts, my brain then gets in that groove. There was nothing for it but to make a cup of tea and put the TV on. We sat in bed drinking tea and eating toast until 8am, I then had to get up to take Paddy out for his morning stroll. Our day was planned out we would be walking to Horseshoe Falls, which is a 2 mile walk up the towpath, we have been told it is well worth the walk.

Before heading to the falls we went to the motorcycle and car museum, which is on the way and about a mile into the walk.

We paid our £3.50 each and enjoyed a walk through history.

There was even an old Elsan.

The canal also got a mention.

After a interesting time in the museum, we carried on with our walk to the falls.

The scenery was abs0lutely stunning.

Chain Bridge Hotel, is looking a little tired from the outside, but is open for business and having popped in to use the toilet, the meals looked fantastic.

The Chain Bridge is really in a desperate state.

We arrived at Horseshoe Falls and were really impressed by it and yes it was well worth the walk. The distinctively shaped weir creates a pool of water that can enter the valve house and flow meter for the Llangollen Canal, which begins here, and was originally designed and constructed in 1808 by civil engineer Thomas Telford. This stretch of the canal is 460 feet (140 m) long. 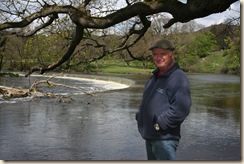 Love this photograph I took of Keith.

We sat and ate our packed lunch just up from the falls and got to watch the trains heading and returning from Carrog.

Even the steam trains were out to play. After lunch we walked further up the path to Llantysilio Church.

The church stands in a wooded setting on high ground above the Horseshoe Falls and is dedicated to St Tysilio who lived as a hermit in the 7th Century on Church Island in the Menai Strait off Anglesey. The church was built in the 15th century and restored in the Victorian era, it has many treasures including a medieval roof, a small amount of 15th Century glass and a medieval oak eagle lectern.

There claim to fame is Robert Browning.

The church was having an open day, so we were welcomed in and were given a coffee. The church is trying to lift its profile as numbers are dropping.

On the way out we spotted this little ditty.

Our walk back took us back from whence we came, but we got to witness the stunning views from another direction. The views are why I love Wales so.

On the way back Keith went back into the Museum to buy some oil for the engine, because it was only £16 for 5 litres, which is really very good.

Back in Llangollen the trip boat was about to set off with Stan the horse ready to go to work. Keith headed back to the boat with our oil, whilst I stayed and photographed Stan and the trip boat. 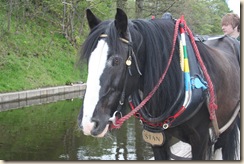 Stan standing still and do placid whilst he waits for people to take their seats on the boat behind. I so love horses and hope that one day I will get to ride again.

Then they were off.

We heard that one of the steam trains was due in, so walked down to the railways station to get a good position to watch it arrive. I must be one of the rare women that absolutely loves trains. I was like a kid in sweetie shop when the train arrived, so got Keith to take this photograph, just a shame my hair looked a mess. 44086 was built in Derby in 1944 for LMS. 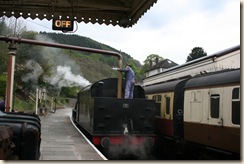 The engine took on water before being coupled up with the wagons. 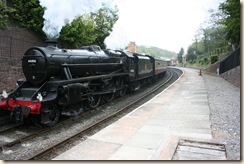 They were then off to Carrog. What a fantastic sight. I love the steam and the smell of the coal burning. 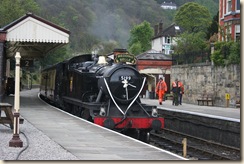 Next into the station was Wedding Belle 5199, with a wedding party on board. 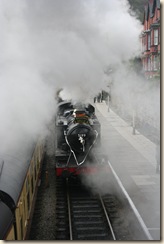 The wedding party were enjoying a meal on the train, then in the evening would be on the restaurant boat on the canal. 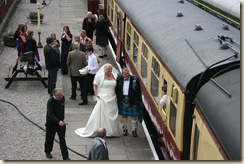 The bride and groom. 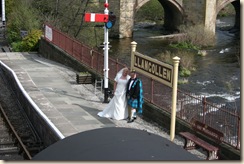 We got chatting to the groom Ian Douglas and found out that he is a boater and has just bought an historic working boat which is having some work done on it at Braunston. It was lovely to chat to Ian and we wish him and his bride all the very best for the future, we look forward to seeing them on the cut.

After watching the wedding train head out again, we headed back to the boat for a much needed sit down, but not before we had an ice cream at the boat trip tea room.

I am now doing some more washing, which will be my 5th load over the past couple of days. That is the joy of being on the electric. Keith has set up our battery management system now, so we can now keep an eye on what our batteries are doing. I did not get my new freezer going, but there is no real hurry for that. Dinner was Chicken Korma, Rice and Naan Bread, and now I am going to put my feet up whilst my washing machine is doing another load.

Tomorrow we will be heading back to Froncysyllte, because out 48 hours stay will be up in the morning. We are setting off early doors, so I think an early night will be called for.